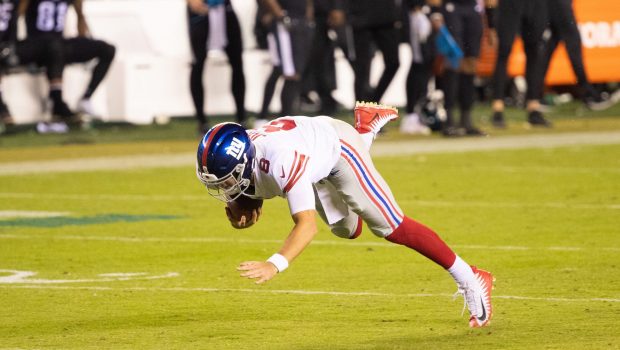 Daniel Jones had the most wide-open field you’ll see in an NFL game. He completely fooled the Eagles on a read option, ran around right tackle and was off to the races.

Jones is fast and nobody on the Eagles was going to catch him. Fox said Jones reached 21.2 miles per hour on the run. He had nothing but green grass in front of him. It was an easy touchdown as all he had to do was keep running.

And somehow, Jones fell down. He didn’t trip. He didn’t hit a bad part of the turf. He simply fell over.

“I tried to run faster than I was running and got caught up,” Jones said postgame.

He got 80 yards when 88 would have been a touchdown.

Daniel Jones’ teammates got a good laugh on the sidelines ? pic.twitter.com/Pgs1QLeYvm

Fox showed a clip of the Giants’ sideline, and Jones’ teammates watching the replay and laughing. Sometimes, that’s the only reaction. Especially when you play in the NFC East, the only division without a winning team this season.