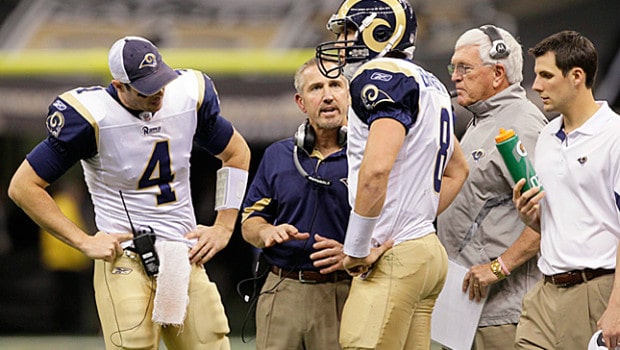 If any coach in the NFL knows more about Eagles QB Sam Bradford than Giants’ defensive coordinator Steve Spagnuolo, let them please step forward and make their case.

Spags, who was Eagles’ D-boss under Andy Reid and Rams’ head coach when Bradford was drafted (photo above), still thinks highly of the Birds’ starting QB.

“Sam Bradford? Yeah, I have to say he’s a good football player,” Spagnuolo said when asked if his familiarity with the Eagles’ quarterback will help the Giants in Monday night’s crucial NFC East showdown at the Linc.

Spagnuolo was the Rams head coach in 2010 when, fresh off a 1-15 finish the previous season, the franchise selected Bradford with the No. 1 pick in the NFL Draft. Bradford earned Offensive Rookie of the Year honors that year as the Rams improved to 7-9.

But Bradford was hampered by injuries the next year, the Rams went 2-14, and Spagnuolo was promptly fired.