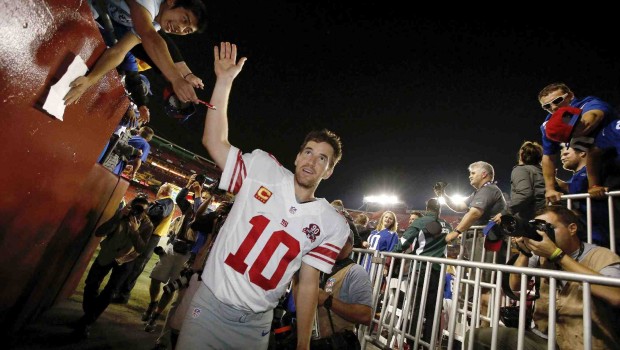 At least now we have a sense of which team the Eagles’ may fear the most in the NL East.

The Giants put it all together on Thursday night in a 45-14 victory over the Washington Redskins at FedEx Field.

In their first division game of the season and with the rest of the NFC East watching, the Giants (2-2) showed signs of a team that could be a factor. They did it offensively, defensively and with quarterback Eli Manning’s best and most productive performance since the 2012 season finale.

Manning (photo above) accounted for five touchdowns (four passing, one running). Yes, one running, or whatever it’s called when his arms and legs pump slowly.

And then there were the Giants tight ends. The group that was considered insufficient coming into the season lit up the scoreboard (with Larry Donnell leading the way with three touchdown catches). Daniel Fells added one as well.

The Giants reversed the Thursday night trend. Instead of the home team coasting in a blowout victory, it was the road team that embarrassed the home team in this one, sending Redskins fans to the exits before the third quarter concluded.

The Giants never really looked back. Washington continued to implode and turn it over throughout the evening and Donnell and the Giants tight ends continued to score touchdowns.