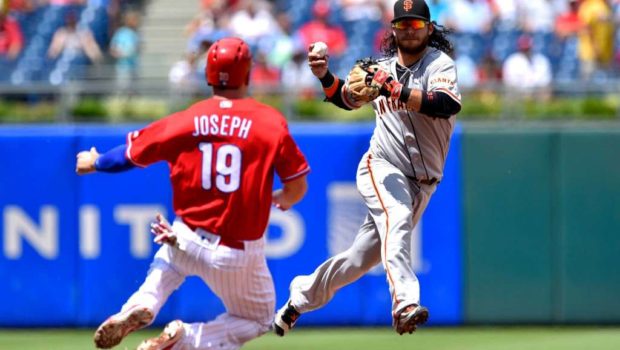 GIANTS AVOID PHILLIES SWEEP, WALK OFF WITH A 10-INNING 3-2 WIN

Denard Span christened yesterday’s 10th inning with a leadoff homer that lifted the Giants over the Phillies, 3-2 at the Bank.

Having weathered a series of nagging injuries this season, Span went 7-for-15 with four runs scored in three games against the Phillies. He’s also batting .347 (26-for-75) in his last 19 games.

“I don’t want to get ahead of myself, but I just want to try to build off of this,” said Span, who broke a 2-2 tie against Phillies reliever Severino Gonzalez (0-2) with his fifth homer of the season.

The National League West-leading Giants avoided a sweep by the Phillies, who got only four hits off starter Matt Moore and five relievers.

“I don’t know, we just couldn’t solve him for whatever reason,” Phillies manager Pete Mackanin said of Moore. “I thought we were going to after that first inning. … He kept pounding the strike zone. He pitched outside and inside. He kept mixing it up, threw some curveballs and changeups.”

Span also accounted for the Giants’ first two runs by singling and scoring in the first inning and on a sacrifice fly in the fifth. The Phillies kept pace, as Aaron Altherr doubled home Cesar Hernandez in the first inning, before Freddy Galvis’ bases-loaded fielder’s-choice grounder delivered their second run in the sixth.