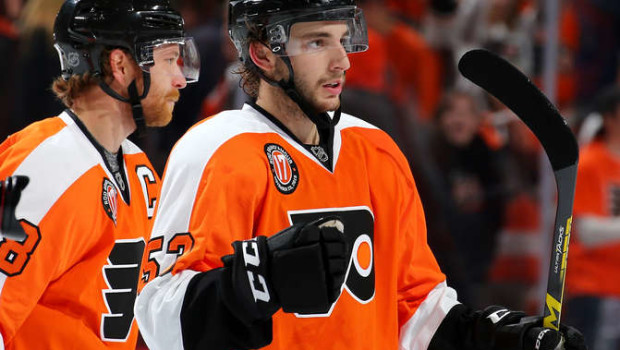 Rookie defenseman Shayne Gostisbehere scored a power-play goal 24 seconds into overtime to give the Flyers a 3-2 win against the Carolina Hurricanes at the Wells.

The Flyers had a 2-0 lead after two periods, but the Hurricanes (7-10-4) got goals by Victor Rask and Brett Pesce in the third.

“The third period wasn’t our best period. We played a great first two periods and, you know, we let the game get away from us a little bit,” said Gostisbehere, who has two goals in five games since being recalled from Lehigh Valley of the American Hockey League. “We got away from our hockey, so it was good to get the two points.”

Claude Giroux had a goal and two assists, Brayden Schenn scored, and Michal Neuvirth made 31 saves for the Flyers (7-9-5), who ended a three-game losing streak (0-1-2).

Schenn scored on a power play at 10:20 of the second period to end Philly’s goal drought at 162:54; the Flyers had been shut out in back-to-back games and in three out of six. Giroux sent a cross-ice pass to Jakub Voracek in the right faceoff circle, and Voracek set up Schenn for a tap-in from the top of the crease.

Giroux scored a shorthanded goal 4:48 later to put the Flyers ahead 2-0, knocking in the rebound of a Sean Couturier shot on a 2-on-1 for his seventh goal. The Flyers were 5-for-5 on the penalty kill.

“[Couturier] had a good play,” Giroux said. “I don’t think he was trying to give me a rebound, but, you know, I’ll take it. We were aggressive tonight. We did a good job. Obviously, our [penalty kill] starts with our goalie.”

Rask scored his sixth goal at 7:58 of the third period to pull the Hurricanes within 2-1, and Pesce tied it when he banged home a rebound of Ron Hainsey’s point shot with 3:45 remaining for his second of the season.

“We didn’t play very well through 40 (minutes), and then we found a way to get it tied up,” Carolina coach Bill Peters told the Hurricanes website. “To play less than 60 minutes and be able to get a point is good.”

Hurricanes goalie Eddie Lack made 33 saves, including one against Schenn on a penalty shot with 2:54 left in the first period. Schenn got the chance after he was hooked from behind on a breakaway by Carolina rookie defenseman Noah Hanifin.

“We weren’t happy with our play after two (periods), but it felt like the boys came out hard in the third,” said Lack, who is 1-4-1 with a 3.30 goals-against average and .875 save percentage in his first season with the Hurricanes. “We definitely deserved the point.”

Couturier drew a penalty against Rask for holding 11 seconds into overtime to set up Gostisbehere’s game-winner.

After Giroux won a draw in the right faceoff circle, Gostisbehere raced to the blue line to keep the puck in the zone. After he and Voracek passed the puck back and forth, Gostisbehere moved it to the bottom of the left circle to Giroux, who returned it to Gostisbehere for a one-timer from between the hash marks that beat Rask to the glove side.

Flyers forward Sam Gagner did not return after he hit his face on the ice after a hit by Hurricanes forward Brad Malone in the Philly zone at 8:36 of the first period. Gagner played 1:54 in three shifts.