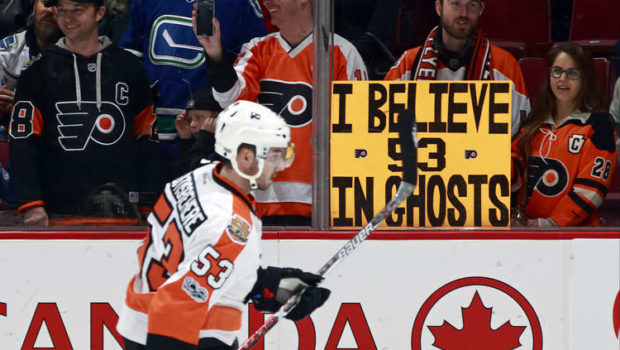 Shayne Gostisbehere’s career night helped the Flyers to a morale-boosting victory in their push for a playoff spot.

The second-year defenseman set up each one of his team’s goals for his first three-point game in the NHL, and the Flyers beat the Vancouver Canucks 3-2 last night.

“It’s good to get some points, but I think it was more important to get the two points for our team,” Gostisbehere said. “We really needed those.”

Wayne Simmonds, Jakub Voracek and Brayden Schenn scored for the Flyers. Michael Neuvirth stopped 18 shots in the win, and Gostisbehere had three assists.

Markus Granlund and Jannik Hansen scored for Vancouver, which got 25 saves from Ryan Miller.

The runner-up for Rookie of the Year last season, Gostisbehere has been a healthy scratch five times in an up-and-down sophomore campaign. He has four goals and 21 assists in 53 games.

“He has his confidence and a little bit of swagger,” Simmonds said. “He’s a heck of a player and has unbelievable skill. He can be a catalyst offensively for us.”

The Flyers lost the first two games of their three-game swing through Western Canada but picked up a much-needed victory in Vancouver to move within two points of the second wild card in the Eastern Conference.

“We were playing some pretty good hockey of late, but the pucks weren’t going in,” Schenn said. “We tightened up defensively and were able to score a few more goals.”

That included connecting twice on the power play after going just 2 for 19 over their previous six games.

“It’s a step in the right direction,” said Schenn, who scored his league-leading 14th goal with the man advantage.

The Canucks, meanwhile, couldn’t build on Saturday’s 2-1 overtime win against Calgary following a 2-4-0 road trip and head into their five-day break four points back of the Flames for the second wild card in the West.

Trailing 3-2 through 40 minutes, Vancouver and its 28th-ranked power play got a chance early in the third period but failed to register a shot. The Canucks finished 0 for 4 with the man advantage and are 0 for 12 over their last four games after the unit tallied goals in five straight.

“Execution was off, we got shots blocked again, didn’t make the right decisions with the puck,” said Vancouver captain Henrik Sedin, whose team mustered only six shots in the third period. “(Against Calgary), I thought we had a lot of chances. Tonight we were back to just scrambling again.”

The penalty kill has also given up four goals over the last three games.

“Our specialty teams let us down,” Canucks coach Willie Desjardins said. “I don’t want to put all the pressure on the power play or a few guys because it’s a team and we’ve got to play as a team, but saying that, we probably need a little bit more out of the power play.”

Up 1-0 after the first period, the Flyers caught Vancouver napping early in the second when Gostisbehere fired a puck from behind the net off the boards to create a 2-on-1. Miller stopped Sean Couturier’s initial shot, but Voracek was there to jump on the juicy rebound for his 15th goal of the season and first in 10 games.

Having already allowed a power-play goal in the first, the Canucks gave up another 1:27 later when Schenn wheeled into the high slot and ripped a shot past a screened Miller, who made 35 saves against the Flames on Saturday night.

It was Schenn’s 18th goal of the season.

Granlund got Vancouver on the board at 3:43 on a slick deflection for his 15th, and Hansen pulled Vancouver within one at 12:42 after Bo Horvat cut hard to the net. The puck popped out front to Hansen, who chipped a fluttering shot past Neuvirth’s glove for his sixth.

The Canucks nearly tied it seconds later when Reid Boucher jumped on a terrible turnover by Michael Del Zotto in the Flyers end, but Neuvirth was there to make a point-blank glove save.

“There was good things in the game, but ultimately we lost and we need to make up some ground, so it’s frustrating,” Miller said. “We showed good spirit, but it doesn’t really mean much now.”

The Canucks killed off an early Flyers power play, but Alexandre Burrows was whistled for hooking moments later and Philly made Vancouver pay when Simmonds banged a rebound of Gostisbehere’s shot through Miller’s legs for his 25th of the season and fourth in five games.