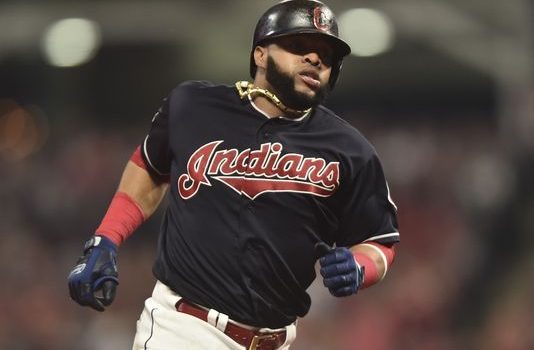 The Phillies sent a message to the rest of the NL East yesterday:

We’re not screwing around anymore with 66-96!

They added first baseman Carlos Santana on a three-year, $60 million contract — the clearest sign yet they are ready to start building back up what they spent the past few years tearing down.

While the Phillies are probably not ready to contend in 2018 — they finished 31 games behind first-place Washington in NL East in 2017 — they have the financial wherewithal to continue spending in future offseasons and hope to put together another mini-dynasty of the sort that won five straight division titles from 2007 to 2011.

Santana, a 31-year-old switch hitter with a career on-base percentage of .365, was a mainstay of the Cleveland Indians lineups that produced three playoff appearances in the past five years, including the 2016 American League pennant. He joins a core of position players in Philly that includes Rhys Hoskins, Aaron Altherr, Nick Williams and Maikel Franco.

Next winter, the Phillies, who have few future payroll commitments beyond Santana, are expected to be major players in a free-agent marketplace that could include Bryce Harper, Manny Machado, Josh Donaldson and Clayton Kershaw.

Santana, who has also played catcher, third base and outfield during his career, has developed into a stellar defensive first baseman, but it is unclear how the Phillies will deploy him. Hoskins, a breakout star last summer with 18 homers in only 50 games, is a natural first baseman who played mostly in the outfield for the Phillies in 2017.

Santana was the first big-name position-player free agent to sign in an otherwise slow-moving market. The Boston Red Sox were also believed to have interest in him, but they are also pursuing outfielder J.D. Martinez, considered the top free-agent hitter on the market.