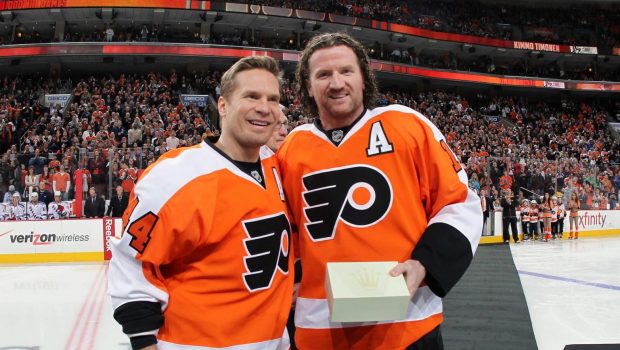 GETTING TIMONEN AND HARTNELL WAS FLYERS TRADE FOR THE AGES!

On June 18, 2007, the Flyers made a trade with the Nashville Predators, sending a first-round pick for winger Scott Hartnell and defenseman Kimmo Timonen.

They both quickly signed long-term contract extensions with the Flyers, and made a huge impact for the club throughout the late 2000s up until the mid-2010s. They were significant additions who became faces of the franchise. Without this trade, the Flyers might not have been as good as they were, and they might not have had as much success as they did.

Some might not remember this, but the trade to acquire both Timonen and Hartnell was actually the second trade between both Philadelphia and Nashville within a few months. The Predators were looking to make a run during the 2007 Playoffs and were looking to bring in another big piece to help them compete.

The Flyers sent them Hockey Hall of Fame forward Peter Forsberg in exchange for forward Scottie Upshall, defenseman Ryan Parent, and a first and third-round pick in 2007’s NHL Draft. The first-round pick in 2007 that Nashville sent to the Flyers in the Forsberg trade was sent back to the Predators in the deal to bring in both Timonen and Hartnell a few months later.

One thought on “GETTING TIMONEN AND HARTNELL WAS FLYERS TRADE FOR THE AGES!”