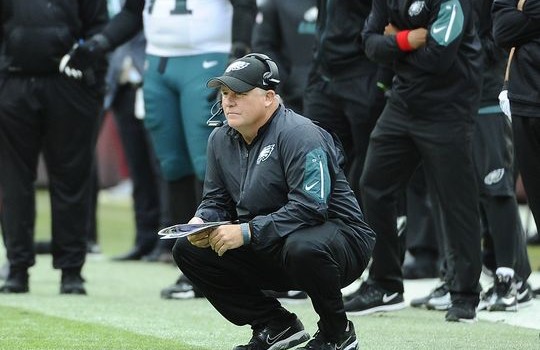 GET SERIOUS! FLORIDA IS ABOUT HIRING EAGLES WASHOUT CHIP KELLY!

Eagles washout coach Chip Kelly, who also flamed out with the Niners, seems to be a serious candidate for another coaching job.

Chip Kelly, Scott Frost and Mississippi State’s Dan Mullen are the focus at Florida, “with sources indicating that a thorough vetting of Kelly has begun. That includes calls to NFL executives to do general background on Kelly and exploration of his NCAA issues at Oregon.”

Thamel adds that if Kelly is interested, a deal could come together soon:

There are some quirks to Kelly, many of which revolve around his stated preference of being locked in on coaching his team. Kelly isn’t keen on the booster glad-handing, rubber-chicken banquet speeches and general day-to-day hysteria that come with high-profile coaching jobs. Kelly has a low-key personality off the field, and he’s reiterated to friends that “fit and people” will be the ultimate determinations of where he coaches next.

Kelly wasn’t thought to be intrigued by SEC jobs, but Florida presents a different dynamic as it has more of Kelly’s preferred East Coast vibe.

Kelly posted a 46-7 record at Oregon, followed by a 28-35 record in four seasons as an NFL head coach in Philly and San Francisco. He’s currently a college football analyst at ESPN and still collecting a paycheck from the 49ers after being fired after just one year with San Francisco.