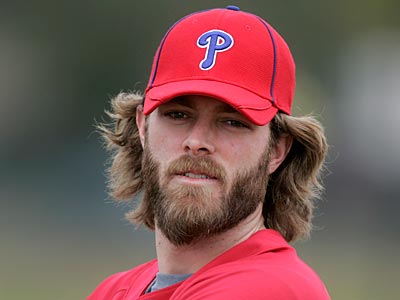 GET OVER IT: EX-PHILLIE JAYSON WERTH IS ON HALL OF FAME BALLOT!

When MLB announced yesterday that several Phillies had made the Hall of Fame ballot, no one could have argued with Jimmy Rollins, Scott Rolen or Bobby Abdreu.

Here’s a sugar plum from the New York Times:

When Werth signed a seven-year, $126 million contract with Washington in December 2010, it flummoxed the sport:

Here was a solid player for the powerhouse Phillies being paid like a star to move to the struggling Nationals.

To Werth, it was a perfect fit.

“I was looking at being there four, five, six years,” he said the next spring, referring to the Phillies. “Where was their team going to be toward the end of my contract?”

Werth’s forecast was accurate; for most of his deal, the teams’ fortunes were indeed flipped.

This fall, though, the Phillies were on their way to the World Series, and cheers greeted Werth as he fired the ceremonial first pitch of the pennant-clinching game — and fired is the accurate verb — to Bryce Harper, whom he mentored in Washington.

“What are you doing? I’ve got to play a game!” Harper said later, recalling what he told Werth. “Thank goodness I’m a catcher, or I used to be. I wanted to kill him.” Harper smiled and added: “So J-Dub.”