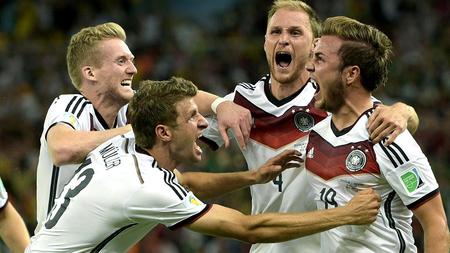 But for Lionel Messi and Argentina, their national nightmare continues

It had more twists and turns — and almost as much blood — as a heavyweight title fight.

But when the knockout blow finally came it was delivered by one of the smallest players on the field, with second-half substitute Mario Goetze (right in photo above) scoring in the second overtime to give Germany its long-sought World Cup title with a 1-0 victory over Argentina on Sunday at Maracana Stadium.

The play started with another substitute, Andre Schuerrle, making a long run up the left side, pulling up and delivering a perfect cross to Goetze deep in the 18-yard box. Goetze, who had slipped between defenders, chested the ball down, then volleyed it out of the air with his left foot.

And with that goal, Germany’s misery came to an end: In each of the last four World Cups it had made the semifinals. But until Sunday it had gone 24 years without a title, and it won its first in the Americas.

For Argentina and Lionel Messi, the nightmare goes on. Argentina’s drought is even longer than Germany, stretching back to 1986 while Messi, arguably the world’s best player, is also the best player without a world championship.

Anyone who thought this would be easy was mistaken. This World Cup final was proof that opposites attract.

Germany hadn’t been shut out in the tournament. Argentina had scored just once in regulation time since the group stage.

Germany had scored 17 goals in this World Cup, seven of them in its semifinal. Argentina hadn’t allowed a goal in 3 1/2 games before Sunday.

Meanwhile Italian referee Nicola Rizzoli struggled to keep control of game that was growing increasingly chippy as it wore on. But if the second half had been plodding, the overtime opened quickly with Schuerrle — who has three goals in this World Cup despite limited playing time — surprising Argentine keeper Sergio Romero with a solid shot from about 15 yards. But Romero didn’t flinch, pushing the shot away.

Then it was Argentina’s turn with second-half substitute Rodrigo Palacio flipping a soft right-footed shot over onrushing German keeper Manuel Neuer, only to have it miss the goal.

Messi got perhaps his best chance to be a hero seconds into the second half but his wide-open shot from the left wing — which beat Neuer — missed the far post by a couple of feet.

About 10 minutes later Neuer took down another Argentine forward, this time in a spectacular — and frightening — collision with Gonzalo Higuain.

Pablo Zabaleta had sent a long pass forward for Higuain, who was racing toward the boundary of the 18-yard box on the right side. Neuer took a gamble, coming off his line to try to beat Higuain to the ball — which he did, but only by leaping above the Argentine and punching the ball away with his right fist.

As he did so, his knee struck Higuain hard in the head, flattening him.

That followed a much more active first half in which Germany build a huge lead in possession — 65% to 35%, a lead it largely maintained in the second half. But Argentina nearly stole a goal in the 21st minute when a bad clearance by Germany’s Toni Kroos sent the ball the wrong way, freeing Higuain to charge in alone on Neuer.

Neuer never got the ball, though, with Higuain mis-hitting his right-footed shot so badly the ball went well wide of the net on the left side.

Higuain actually found the back of the net eight minutes later, though, taking a nice cross from Ezequiel Lavezzi deep in the area and redirecting it past Neuer with this left foot. But while Higuain was celebrating, the official on the far touchline was holding out his flag, signaling a clear offside call that negated the goal.

Despite the big difference in time of possession, Argentina keeper Sergio Romero wasn’t really tested until the 37th minute. The best first-half chance came in stoppage time when a bending corner kick found Benedikt Hoewedes charging toward the six-yard box. His header banged off the post, then struck Thomas Mueller in the thigh before being wrapped up by Romero.

Not that the deflected shot would have counted since Mueller was offside.