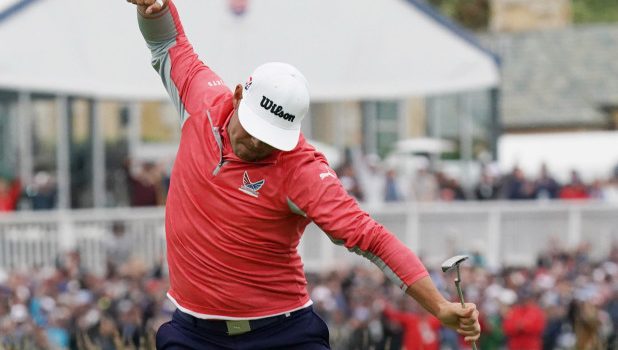 History was made yesterday at the U. S. Open in Pebble Beach.

Just not the kind that was expected.

Koepka, trying to match a 114-year-old record with his third straight U.S. Open, kept the pressure on until the very end. Woodland got better with each big moment he faced, whether it was a 3-wood from 263 yards or a lob wedge from the putting surface that will take its place with other big moments on the 17th hole of Pebble Beach.

Needing three putts to win, Woodland finished in style with a 30-foot birdie putt for a 2-under 69, giving him the lowest 72-hole score in six U.S. Opens at Pebble Beach and a three-shot victory over Koepka. He raised both arms in the air to salute the crowd, turned toward the Pacific and slammed down his fist.

“I never let myself get ahead,” Woodland said. “Once that went in, it all came out of me. It’s special to finish it off here at Pebble Beach.”Koepka had to settle for a footnote in history. He closed with a 68, making him the first player with all four rounds in the 60s at a U.S. Open without winning.

But he made Woodland earn every bit of his first major championship.

Clinging to a one-shot lead with more pressure than he has ever felt, Woodland seized control by going for the green on the par-5 14th hole with a 3-wood from 263 yards, narrowly clearing a cavernous bunker and setting up a simple up-and-down for a two-shot lead.

“The idea was to play for the win,” Woodland said. “I could have laid up. That 3-wood separated me a little bit.”

It was the shot of the tournament, until Woodland hit one even better.

He dropped the 5-iron from his hands when it sailed well to the right on the par-3 17th, the edge of the green with the pin 90 feet away over a hump. Up ahead on the par-5 18th, Koepka drilled a 3-iron just over the back of the green, leaving him a 50-foot chip for eagle to tie, with a birdie likely to do the trick considering what Woodland faced on the 17th.

Koepka chipped to 10 feet and narrowly missed the birdie putt. Woodland, unable to hit putter and get anywhere near the hole, opted to pitch it. He clipped it perfectly just over the hump, and it checked about 12 feet from the hole and trickled out to tap-in range.

“I was just trying to get it over that hump,” Woodland said. “I thought it had a chance to go in, but it’s not one I want over.”

That effectively ended the U.S. Open.