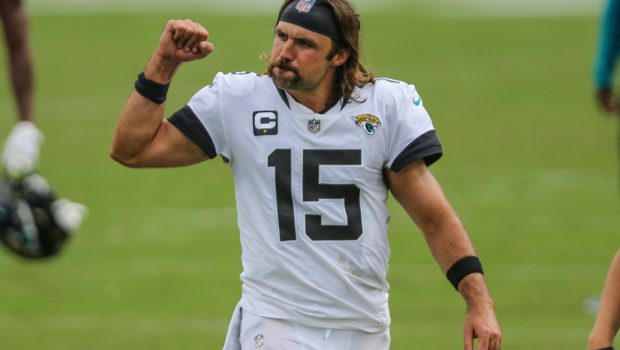 Friday night Joe Flacco gave Eagles fans some hope that he is competent enough to be Jalen Hurts back-up quarterback, even though he is 36 years old.

He won a Super Bowl for the Ravens, but that was in the 2012 season — nine years is like two lifetimes in the NFL.

And then yesterday the Eagles traded for young Gardner Minshew, giving up a conditional 6th pick, the very definition of chump change.

So, Gardner, are you coming to Philly to be a clipboard carrier or compete for the top job?

“You think the Lord likes half-asses? I don’t think so,” he once said.

General manager Howie Roseman has talked about how he wants the Eagles to be a “QB Factory.” and the addition of Minshew puts some extra gears in the machine. Selected in the sixth round of the 2019 draft out of Washington State, Minshew did some impressive stuff as a rookie

And he played better than you may think for a 2020 Jaguars team that finished 1-15, giving them the right to select Trevor Lawrence with the first overall pick. With Doug Marrone as his head coach, Jay Gruden as his offensive coordinator, and Ben McAdoo as his quarterbacks coach (that’s a whole lotta yikes for any young quarterback), Minshew still completed 66.1% of his passes for 2,259 yards, 16 touchdowns, and five interceptions. He ranked 27th in the NFL in Football Outsiders’ opponent-adjusted DYAR efficiency metric, and 23rd in Pro Football Reference’s Adjusted Net Yards per Attempt metric.

We’re not saying that Minshew is ever going to be a top 10 starting quarterback in the NFL, but when you watch his tape, there’s more meat on the bone than you might think, and Minshew has the capability to at least make the Eagles’ primary backup job as interesting as it should be. Certainly, Minshew could be something more than he’s been in the right system. We don’t yet know what Sirianni’s system will be, but if you like accurate deep passes, shot plays off play-action, and functional mobility, you could do a lot worse.

Last season, Minshew ranked 23rd among quarterbacks who played at least 20% of their teams’ snaps with 43 attempts of 20 or more yards, with 43. He completed 15 of them for 430 yards, four touchdowns, two interceptions, and a quarterback rating of 84.4. This 28-yard touchdown to Chris Conley against the Chargers in Week 7 of the 2020 shows Minshew’s functional accuracy when everything ‘s working correctly. Minshew has several examples of “biscuit in the basket” downfield throws on his resume.