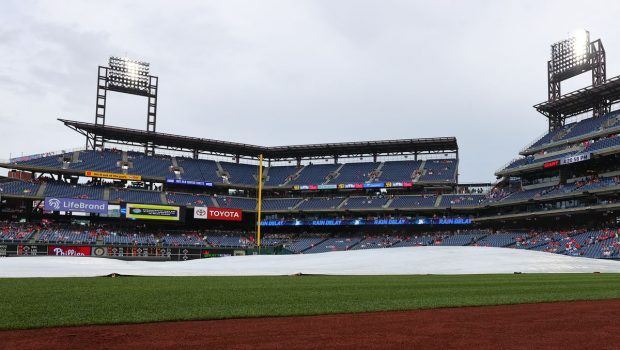 Game 3 of the World Series between the Phillies and Houston Astros was scrubbed at about 6 pm last night by a forecast of rain.

It will now be played Tuesday with Game 4 set for Wednesday and Game 5 on Thursday.

Games 6 and 7, if necessary, will be played on Saturday and Sunday in Houston with Friday serving as an off day. Originally, Thursday was supposed to be a travel day, but MLB pushed Games 6 and 7 back a day to allow for travel now on Friday.

“It’s always a tough call when the current weather might be playable, because you’re relying on a forecast,” commissioner Rob Manfred said in announcing the postponement. “We waited long enough that we could see what’s coming. We had three, actually four different weather people looking at it, everybody was consistent about this second wave of rain.”

The announcement came about an hour before first pitch Monday and after the Phillies took partial batting practice. Astros pitchers were throwing in the outfield moments before the tarp came on the field and the rain started up.