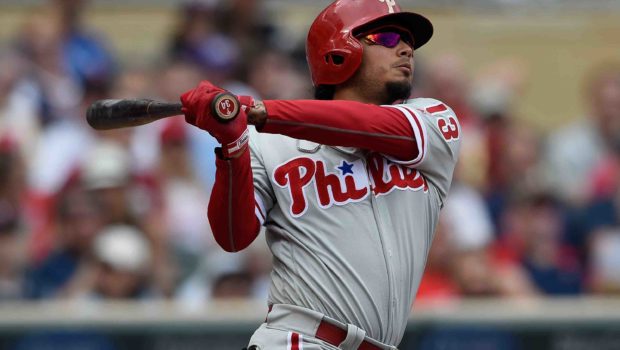 The Phillies stopped the bleeding yesterday in Minnesota.

A towering three-run homer in the eighth inning gave Freddy Galvis a career-high five RBIs, as the shortstop powered the Phillies to a 7-3 win over the Twins behind a solid Jerad Eickhoff.

The win snapped a season-long nine-game losing streak for the Phillies, who have struggled over the past month. After starting the season 24-17, they are 7-26 since May 18.

“I think we’re something in between,” Galvis said. “The thing we have to be working on is mental stuff. Mental stuff because we have to learn to turn the page really quick. If we lose today, tomorrow’s another day.”

Ryan Howard also homered as part of a two-hit afternoon, notching his first multi-hit game since April 29, while Cesar Hernandez tied career-highs with four hits and three runs scored for the Phillies. Maikel Franco, who walked three times, was the only Phillies starter not to record a hit in a 15-hit barrage against right-hander Ricky Nolasco and the Twins.

Although the Twins scored in the first inning for the third straight game on an RBI double by Brian Dozier, Nolasco allowed four runs on 10 hits over 6 2/3 innings, and Kevin Jepsen yielded the late homer to Galvis to put the game out of reach.Max Kepler was the only Twins player to record two hits in the loss.

“It was a struggle right from the get-go,” Nolasco said. “I’ve been pitching long enough to know that no matter how you feel, good or bad, you still have to go out there and get outs. The thing I was thinking was that I’ve just got to try to go as deep as possible in the game. I know I didn’t have much going, but I tried to keep us close as much as possible.”