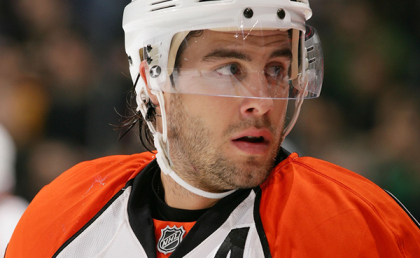 Flyers fans who are depressed about the team’s miserable start may also now be wondering why their favorites didn’t re-sign Simon Gagne last year.

Gagne is also wondering, especially now that the Boston Bruins are on the verge of inking the 34-year old Gagne.

And he blames current team president Paul Holmgren, whom he believes reneged on a commitment for another contract.

Gagne, a Flyers left wing for his first 10 NHL seasons and again for the second half of his last one, really wanted to play against his former team in last Wednesday night’s season opener at TD Garden.

Gagne was looking forward to playing his 800th NHL game against the team he’s known for most, and he would have loved to score a big goal to stick it to Holmgren for leading him on about re-signing him last season.

“I never talked with Homer from that point on,” Gagne said Tuesday. “In time I guess I’ll forget about it … in time.”

Gagne, 34, was a two-time All-Star and big scorer during his first stint with the Flyers from 1999-2000 to 2009-10, then after leaving to play a season for the Tampa Bay Lightning and win a Stanley Cup with the Los Angeles Kings during his 1 1/2 seasons there, he returned to his NHL roots in a February 2013 trade.

Past his prime, Gagne was still able to show that he had some game scoring five goals and 11 points in 27 games. He became an unrestricted free agent after the 2012-13 season, but says that he wanted to re-sign only with the Flyers and that Holmgren, the general manager and now team president, repeatedly stated to him and his agent that that was the organization’s intention.

“That is what they told me from the meeting we had at the end of the season with (then Flyers coach) Peter Laviolette and Homer, and (later) with my agent,” Gagne said. “But something happened. They never told me what happened. Something happened.”

Initially, Gagne thought he’d have a new deal by July 5, 2013, the start of the free agent signing period that year. When that didn’t happen because the Flyers needed to clear cap space, Gagne says that he was reassured he was still wanted by Holmgren.

“It went on and we had a good talk, me and Homer,” Gagne said. “My agent and (Holmgren) kept in contact pretty much every week. They were trying to make a trade to free some money for the cap. Everything was going well.”

Gagne says that he asked for a two-year deal, but would have taken a one-year contract and that money wasn’t going to be an issue. He was sure the sides would come to terms until he was home in Quebec City one summer day and received word that the Flyers had decided to go in another direction.

“We got a call in the middle of August that what was on the table, what we were talking about, was not going to go through,” Gagne said. “I was not too happy at that time. Middle of August … especially that year. All the teams had to go down $2-3 million because the cap was going down (due to the lockout).

“So it’s the middle of August and all the teams were against the cap. There was no other place for me to go. I had some calls (for training camp) tryouts, but I so disappointed. I kind of lost feeling for the game, fun for the game, so I decided to stay home.”

A team showed interest last December, but by then Gagne decided to just sit out the year and think about making a comeback this season.

So now Gagne, with 264 NHL goals and a 2011-12 Stanley Cup ring on his resume, is looking for another shot to continue his storied career, and he’s optimistic that the Bruins will drop a player soon to make room for him on their 23-player roster.

No matter what happens this season and beyond, Gagne says that he’ll still think of himself as a Flyer when he’s done playing because he’s not upset at the entire organization.

“No, it’s just between me and Homer,” Gagne said. “All the other stuff – (chairman Ed) Snider, the trainers … It’s always going to be my team. When I retire, I’m going to look at myself with a Flyers jersey more than the other teams even though I won a Cup with LA. I was there for 12 years. I have so many good memories there. It was a second home. That’s what was tough when it went down like that.”