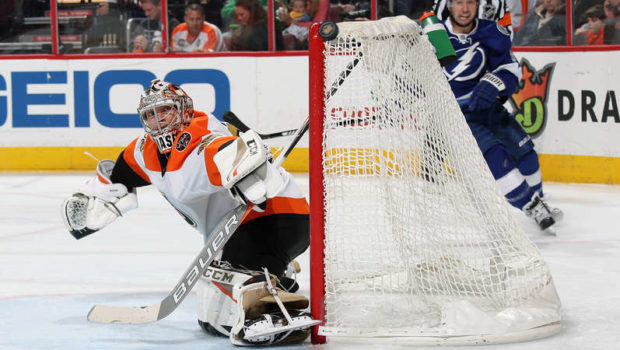 FUTILE FLYERS NO MATCH FOR LIGHTNING 3-0

The Flyers couldn’t bottle up the Lightning.

Andrei Vasilevskiy made 32 saves for his second consecutive shutout when the Tampa Bay Lightning defeated the Flyers 3-0 at the Wells yesterday.

Ondrej Palat had a goal and an assist, and Tyler Johnson and Jonathan Drouin each scored for the Lightning (12-6-1), who won their fourth straight, all on the road.

Flyers goalie Steve Mason made 15 saves. It was the first time the Flyers (8-8-3) were shut out this season. They entered third in the NHL at 3.33 goals per game.

Philly also had the No. 2 power play in the League (27.0 percent), but went 0-for-5, including scoreless on three chances in the first period.

“A few times we had good looks but we missed the net or it got blocked or he made a good save,” Flyers defenseman Mark Streit said. “They played a smart road game and we just didn’t push enough. We didn’t push enough on the gas and didn’t generate enough offensively.”

The Lightning led 2-0 entering the third period but had to kill the final 46 seconds of a penalty on defensemen Andrej Sustr. They got through that, and then Drouin scored after a rink-wide stretch pass from Palat. Drouin carried the puck down the right side of the Flyers zone, used his body to shield the puck from Flyers defenseman Shayne Gostisbehere when he cut through the slot and found space between Mason’s body and left arm.

“I saw [Palat] had full control and the [defensemen] were flat-footed so I decided to leave the zone,” Drouin said. “[Palat] made a great play behind my back on the boards and we got a breakaway out of it.”

Drouin had missed the final 4:40 of the first period and the first 10:34 of the second after taking a hit by Flyers forward Brayden Schenn.

“Just doing the tests and making sure I was fine,” Drouin said. “When the tests were good and it felt pretty good, I was ready to come back.”

The Lightning were playing with 11 forwards and also had lost forward Ryan Callahan for some time early in the second period.

“[Drouin] came back just in the nick of time,” Cooper said. “… I look up and saw him back and said thank goodness.”

Palat gave the Lightning a 2-0 lead at 7:40 of the second period when he took a drop pass from Vladislav Namestnikov and beat Mason with a wrist shot.

Johnson’s power-play goal put Tampa Bay ahead 1-0 at 14:25 of the first period. Alex Killorn made a seam pass off the rush that split Philadelphia’s Wayne Simmonds and Michael Del Zotto to an open Johnson, who scored from the bottom of the right circle.