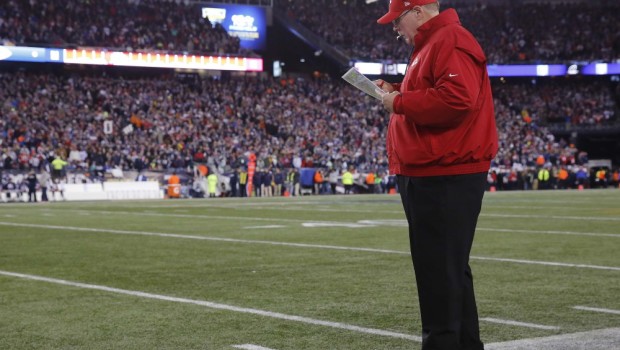 In fact, his failures contributed to the Birds’ 24-21 loss to the Patriots in the 2005 Super Bowl.

And now that he is the Chiefs coach, Reid says his team’s historically slow drive in the fourth quarter of Saturday’s loss to the Patriots was well handled and not indicative of problems with his ability to manage the clock.

Reid said in an interview on 610 Sports Radio in Kansas City that he recognizes the importance of clock management but disagrees with those who think the Chiefs were too slow as they took more than five minutes off the clock before scoring a touchdown that brought them within seven points of the Patriots.

“I think clock management’s very important,” Reid said. “Every situation’s different. It’s a fluid situation on the spot and you’ve got to go off of feel. . . . This situation, I think, was handled right.”

Reid noted that the Chiefs still had all three timeouts after they scored, and he thought that if they had recovered the onside kick they would have been in good shape.

“I thought we handled it right,” Reid said. “You give us a minute on the clock and three timeouts, we feel like we can move the ball pretty good.”

Reid said that he didn’t feel the need to hurry up the play calling because he thought it was more important to call plays that would be effective than to call plays quickly.

“At that point it really didn’t matter to me. I wanted to make sure we were calling the best plays,” Reid said.

The Chiefs did call the plays that got them into the end zone at the end of that drive. But they took so long in calling those plays that they gave themselves little margin for error. When the Chiefs failed to recover the onside kick and then allowed the Patriots’ offense to pick up a first down, that was the game. That’s what happens when you waste time on offense while trailing by two touchdowns, and the slow pace of the Chiefs’ offense was a mistake, whether Reid wants to admit it or not.