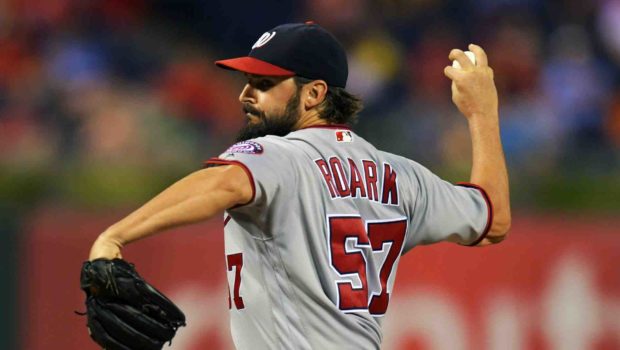 The NL East-leading Washington Nationals began a stretch of 22 games against division foes last night with a gem from right-hander Tanner Roark (above) , combined with a two-run first inning, for a 4-0 victory over the Phillies at Citizens Bank Park.

Roark held the Phillies to four hits in seven innings while Jayson Werth continued to torment his former team with a solo homer in the first inning.

“I think after the first two innings, I started executing and really driving the ball in there,” Roark said. “Instead of using my upper body, I used my legs as well. Everything felt in sync.”

Washington added a pair of runs in the ninth inning and has now won nine of its 13 meetings with Philadelphia this season, including seven in a row.

The Phillies did receive an encouraging start from right-hander Jake Thompson, the team’s top pitching prospect and fifth ranked overall, who lasted a career-high seven innings. After giving up two runs in the first, Thompson scattered five singles and did not allow a run across the remainder of the outing, with three strikeouts and one walk.

“What a job he did after the first inning,” Phillies manager Pete Mackanin said. “In the first inning, it was more of the same. He hung a breaking ball to Werth and gradually, as the game went along, he got better and better. … A real positive outing.”