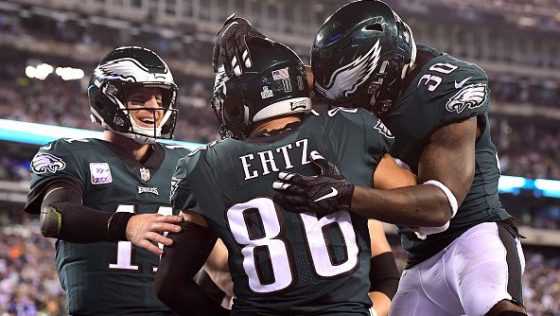 There’s nothing like a blowout win in the NFL to make Eagles Nation feel great on Friday morning.

After a surprisingly slow 2-3 start, the Super Bowl champs beat the hell out of a terrible New York Giants last night at MetLife.

Carson Wentz’s first big play was a nice touchdown pass back across the field into the end zone to Alshon Jeffery, and the rout was on.

The Giants never seriously challenged the Eagles as the Birds rolled to the 34-13 win.

The Eagles likely aren’t thrilled to be just 3-3 after six games. But the rest of the NFC East doesn’t look that tough, and the Eagles looked like they might be back on track.

But the Eagles had reasons for the slow start. The Super Bowl hangover is probably one reason, but the bigger one was Wentz.

Wentz was coming off an ACL injury, didn’t play in the preseason or the first two games of the regular season. Wentz is a tremendous talent but it’s still understandable if he was rusty.

He looked much like the same player who was neck-and-neck with Tom Brady for the MVP award last season when he injured his knee. He made quick decisions and got the ball out with good velocity. He spread the ball around to many different receivers.

Through three quarters he was 10-for-10 for 155 yards and two touchdowns on third downs. He made the early touchdown to Jeffery look easy, but it’s the type of play not every quarterback can make. It was Wentz’s best game this season, which is a great sign for the Eagles. He was 26-of-36 for 278 yards, three touchdowns and no interceptions.

The Eagles had other issues in the first five games, but if Wentz plays like an MVP candidate from here on out, it covers up pretty much everything else.

Saquon Barkley ran circles around the defense on some plays, though he’s going to do that to a lot of defenses over his career. Philly’s pass rush did look very good, however. Philly’s run game wasn’t so good that anyone will forget Jay Ajayi, who is out with an ACL injury. But perhaps the Eagles will take a longer look at a possible trade for Le’Veon Bell, LeSean McCoy or someone else.

There are still things to work on, but Wentz looked great, the targets around him made plays and in general the Eagles looked like the far superior team on the field for the first time this season.

Plenty of teams in the NFL came into this season with Super Bowl hopes and lost some games through the first five weeks. The Eagles weren’t an exception. But now they’re back to .500, looked pretty good blowing out the Giants, and those dreams of repeating as Super Bowl champs can start again.