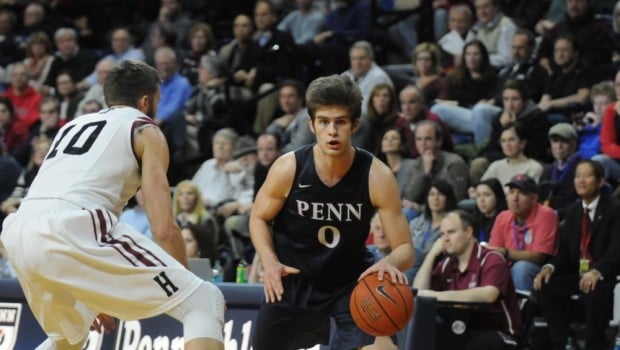 Penn won its second straight Ivy League game with a 67-57 victory over Harvard at the Palestra — a weekend sweep for the Quakers and their first over the Crimson since March 2013.

Before the season began there were very few similarities between Harvard (8-11, 2-3 Ivy) and Penn (9-13, 1-5). The former was coming off its fifth straight league title and NCAA tournament appearance while the later was trying to forget a seventh place finish in the Ivy.

The Crimson blazed to a 7-0 run to start the game, but it only took six minutes for Penn to grab its first lead on a pretty touch in traffic by freshman forward Max Rothschild which made the score 12-10.

Rothschild was a consistent force all game. He grabbed 11 rebounds and scored 14 points while only committing two fouls.

Penn coach Steve Donahue had nothing but praise for his young big man.

“He really competes. The moment’s not too big. He just brings so many different things that help you win.”

Rothschild was just one part of the puzzle down low, as the Quakers would go on to outscore Harvard 46-26 in the paint thanks to exceptional tenacity.

“We have an advantageous in the post with Darien [Nelson-Henry],” Rothschild said, “Every night we try to pound it in the paint because our offense works inside out and that’s how we get those threes.”

Their interior presence allowed Penn, which led 27-25 at the break, to begin the second half hot. They were up by as many as nine multiple times over the first seven minutes of play before Harvard started to chip away at the lead.

With 9:30 left to play the Crimson got their best chance at drawing even when Agunwa Okolie got to the line down, 43-41. But after the Crimson forward missed the front end of the one-and-one, Penn junior Matt Howard made Harvard pay with a midrange jumper to increase the lead to four.

After a quick Harvard two on the other end, it was Howard again who kept the Quakers’ heads above water by scoring three the old-fashioned way after getting mauled on his way to the hoop. The proceeding free throw touched nothing but net and Penn never looked back.

Those were the first five points of a 15-6 run that had the Palestra bouncing with under five minutes to play.

A three by Patrick Steeves briefly halted the Red and Blue surge, but it wasn’t a sign of things to come as Penn never let up.

“The team that’s willing to make the most mistakes is gonna win this game,” Donahue said. “We weren’t afraid.”

Nelson-Henry, Rothschild and Howard combined to score 44 points on 21 of their 33 shots.

The Crimson, playing without junior center Zena Edosomwan, just couldn’t combat the physicality of the Quakers, who walked off to a roaring standing ovation courtesy of the 4,018 Red and Blue faithful in attendance.

Sophomore forward Sam Jones gave a spirited performance notching 13 minutes despite being under the weather. Unfortunately however, sophomore big man Mike Auger, who is suffering from a broken nose and a concussion was unable to even make it to the Palestra for the game.