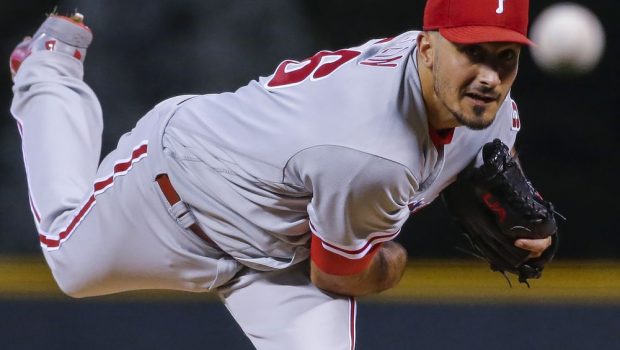 FREE-FALLING PHILLIES ROLLED TO .500 BY ROCKIES!

The free-falling Phillies found out last night what .500 feels like.

Colorado jumped out to a 5-0 lead in the third as Nolan Arenado and Parra delivered run-scoring singles off Zach Eflin (above, 11-8). Wolters and Gray each drew a bases-loaded walk from reliever Austin Davis. Another run scored on a wild pitch.

Eflin lasted 2 2/3 innings and allowed five runs before leaving with some tightness in his left side. He’s heading back to Philly today to get it checked out.

“I felt like the right thing to do with the great season he is having was to get him out of there and out of harm’s way,” Phillies manager Gabe Kapler said. “It was a tough decision but I wanted to protect him and his long-term health and well-being.”

Colorado won its fourth straight game since being swept in Los Angeles by the NL West-leading Dodgers, who remained 1½ game ahead of the Rockies in the division. The defending NL champions won 7-4 at Arizona.

Gray (12-8) was moved up a day when scheduled starter Tyler Anderson was scratched due to shoulder tightness. Gray worked his way out of a bases-loaded jam in the first and only picked up steam from there. His fastball topped out at 97 mph for the first time in several starts.

The right-hander’s one costly mistake was an elevated fastball that Rhys Hoskins hit for a homer in the seventh when the game was out of reach. Gray ended his night by striking out Scott Kingery to finish the inning and left to a round of applause.

“I felt like it was more of myself tonight,” Gray said. “It was more aggressive and attacking the zone. That’s where I need to be.”

The Rockies cranked up the offense to open a four-game series against a Phillies team that has been eliminated from postseason contention. David Dahl lined a two-run homer in the fourth, Tony Wolters drew four walks and Charlie Blackmon had a single to extend his hitting streak to a career-best 16 games.

Story didn’t miss a beat in his return after missing a week with inflammation in his right elbow. His presence was felt at the plate with two hard-hit doubles to center and in the field, where he turned two double plays.

“He came out of a nine-inning game fine. That was a confidence-builder for Trevor,” Rockies manager Bud Black said. “He went through the game and played hard, swung hard, threw the ball hard. We feel good about where Trevor is.”