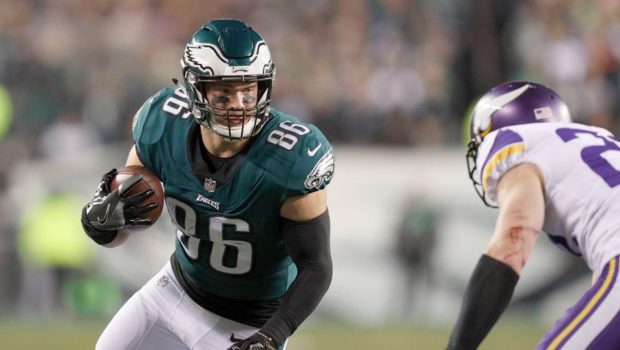 FREE AGENTS ARE GREAT, BUT EAGLES’ TEAM OF DESTINY WAS BUILT ON THE DRAFT!

It is an article of faith that the Eagles would be playing golf today instead of preparing for Sunday’s Super Bowl if Howie Roseman and Joe Douglas hadn’t done a bang-up job scarfing up free agents like LeGarrette Blount, Alhson Jeffery, Torrey Smith and trading for Jay Ajayi.

But the core of this Team of Destiny was built on the draft:

The Eagles sent their 2016 and 2017 first-round picks, plus a 2016 third and fourth and a 2018 second-rounder to the Browns for the second overall selection in the 2016 draft and a conditional fifth-rounder that became a fourth. Wentz was a somewhat polarizing prospect mainly due to his time spent playing against lesser competition at North Dakota State. His rookie year started tremendously then cooled off down the stretch. But he took a seismic leap in his sophomore campaign in the NFL and was a top MVP candidate — along with Tom Brady — before tearing his ACL in Week 14. While the Eagles paid a hefty price for Wentz, the early return seems to be totally worth it.

Agholor was a key aspect of what many believed to be one of the worst wideout groups in football in 2016. Through two seasons in the NFL, the former USC star had 59 receptions for 648 yards and three touchdowns. The move into the slot proved to be a godsend for Agholor. During the regular season he had 62 catches for 768 yards with eight scores. His speed and quickness are better accentuated inside.

One of the most underrated tight ends in football for years now, Ertz broke out in the touchdown department this season. He reeled in eight scores during the regular season and maintained his typical 70-catch, 800-yard production clip. At 6-foot-5 and 250 pounds with a well-rounded skill set, Ertz, who’s only 27 years old, is a critical yet sometimes overlooked element of the Eagles offense.

A converted tight end, Johnson has slowly emerged as, arguably, the best young offensive tackle in the NFL. He’s always been a superb athlete for the position, and as he’s added strength in the pros, Johnson’s play has steadily improved. His three-cone drill, vertical, broad jump, 40-yard dash, and 10-yard split are all in the 95th or better percentile of every offensive tackle prospect who’s participated in the combine since 1999. And yes, even at right tackle, Johnson is vital.

Oh yeah, the quarterback who’s starting the Super Bowl for the Eagles was a third-round pick in the same draft that featured Andrew Luck, Ryan Tannehill, and Russell Wilson. Foles is on his second stint with the Eagles and owns one of the best individual quarterback seasons in NFL history — yes, really. In 2013, he threw 27 touchdowns to just two picks and led the league in quarterback rating, touchdown percentage, and yards per attempt. His 119.2 rating that season is still the third-highest all-time behind Peyton Manning’sepic 2004 and Aaron Rodgers’ ridiculous 2011 campaign. In Chip Kelly’s system, Foles got the ball out quickly and routinely threw with accuracy. Against the Vikings in the NFC title game, with similar responsibilities, he looked to be back in 2013 form.

Kelce is the diamond in the rough most super-successful teams have on their roster. Deemed undersized for the center position, the Cincinnati Bearcat alum has consistently won with incredible mobility and a proper angles. He’s the consummate zone-blocking center who can typically be found delivering textbook combo blocks and demolishing linebackers on screen plays.

Not yet 21 when drafted, the ideal situation for Barnett was to join a team that wouldn’t ask him to be the No. 1 pass-rusher immediately. In Philly, he found himself in that low-pressure environment behind Brandon Graham, Chris Long, and Vinny Curry. At 6-foot-3 and nearly 260 pounds with the ability to tightly wrap the edge en route to the quarterback, Barnett is the ideal situational outside rusher in Jim Schwartz’s free-roaming, attacking defense.

After a solid albeit unspectacular career at LSU, Mills was a polarizing cornerback prospect in the 2016 draft. Playing behind one of the best defensive fronts in football, the tall and lanky Mills came into his own during the 2017 campaign after a shaky start to his career.

Curry was unblockable in college at Marshall, and entered his final season with the Thundering Herd with tons of hype. He may have exceeded expectations with an 11-sack, 22-tackle-for-loss senior campaign but slipped to the third round likely due to his small-school status and a less-than-stellar combine performance. While he’ll likely never receive an All-Pro distinction, Curry has been a steady pass-rushing force in Philly. He ended the regular season with the Eagles’ fourth-highest pass-rushing grade, according to Pro Football Focus.

A rare athletic specimen at the linebacker spot, Kendricks has had a fascinating tenure with the Eagles. Once the subject of trade talks — and there was even speculation he could be cut — Kendricks has been stellar in the defensive front seven. During the regular season he was credited with 73 tackles, two sacks, and six pass breakups.

With three quarterbacks going in the first eight selections of the 2012 draft, many non-quarterbacks were pushed down the board, and Cox was the last player selected in a quartet of future stars that went from picks No. 9 to No. 12 overall (Luke Kuechly, Stephon Gilmore, Dontari Poe). The former Mississippi State standout as been spectacular since he rookie season when he logged 39 tackles, 5.5 sacks and four batted passes. A Pro Bowler in each of his last three seasons, Cox has easily been one of the most disruptive interior defensive linemen in football for a long time.

No one questioned Graham’s production at Michigan and the repeated highlights he put on film while in Ann Arbor. But at slightly under 6-2 and 268 pounds, did he have the size to hold up on the edge in the pros? This unusual stature didn’t bother the Eagles, as they made him the first defensive end picked in the 2010 draft. In fact, Graham’s low center of gravity help him win the leverage battle against taller offensive linemen. His relentless nature coupled with his burst off the snap and ability to bend to the quarterback have made him one of the most underrated pass-rushers in football for his entire NFL tenure. Graham set a career-high with 9.5 sacks in 2017 regular season.