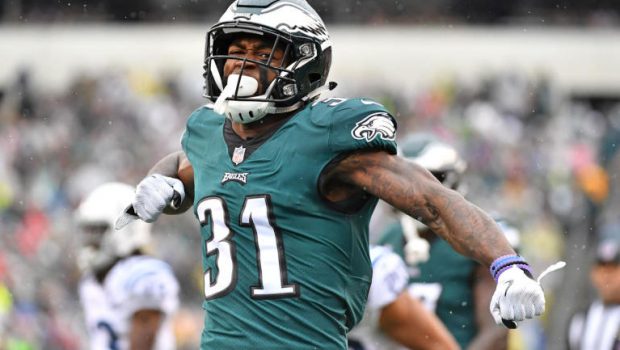 The Eagles have handed the team over to new coach Nick Sirianni and his band of Millennials.

Which is great, and I don’t really give a rat’s ass how old they are, only that they perform well.

And given how low the bar was set by terrible Doug Pederson, that’s not going to be too hard.

But what are the benchmarks?

One that I demand is that Jalen Mills not be on the 2021 roster.

The mediocre Mills has spent his entire career with the Eagles and doesn’t have any plans of relocating this offseason.

The free agent defensive back, who was a pivotal member of the Eagles’ Super Bowl championship team in 2017, wants to remain an Eagle in 2021.

“When you got fans that passionate, why not want to play here,” Mills said on CBS Sports HQ Tuesday. “I’m the green goblin! I love it in Philadelphia. I won a Super Bowl with them.”

Mills, a seventh-round draft pick of the Eagles in 2016, finished with a career-high 74 tackles and five quarterback hits in 15 games for the Eagles last season. The Eagles moved Mills to safety from his longtime position of cornerback as a replacement on the defense for Malcolm Jenkins, but had to move him back to his original position due to all the injuries at cornerback. Mills also had an interception and forced fumble — and would rather play safety if he comes back to Philadelphia.

The Eagles have a new defensive coordinator in Jonathan Gannon, who will assist new head coach Nick Sirianni in his first season with the Eagles. Gannon, who was the Colts defensive backs coach, has never called defensive plays. But he led Indy’s pass defense to 12th in opponents’ passer rating allowed (90.5) in 2020. Mills has talked to players around the league about Gannon and is a fan of what scheme the defensive coordinator will implement.

“When you’re talking about a guy like that, it’s a lot of two-high safety. I kind of feel that’s where the league is going,” Mills said. “He does a great job at giving guys more opportunities in two-high.”

The 2020 Eagles were in a state of turmoil starting with the reported rift between quarterback Carson Wentz and recently fired head coach Doug Pederson. The Eagles chose Wentz over Pederson, but Mills didn’t see any animosity between the two as the season spiraled out of control.

“It was weird. We’re used to winning,” Mills said. “I didn’t see Carson (Wentz) and Doug (Pederson) not getting along. I saw people coming to work every day.”

Mills was impressed in the four games Jalen Hurts started after Wentz was benched, but dodged the question on which quarterback should be the starter in 2021. There’s plenty of time to figure that out.

“You got a guy like Carson who’s been there. We know he didn’t play up to that level this year,” Mills said. “Wentz is a fiery competitor. He wants to be perfect at everything he does. Hurts had a really, really good rookie year. He wins everywhere he goes. But I think you let those guys battle it out in camp.”