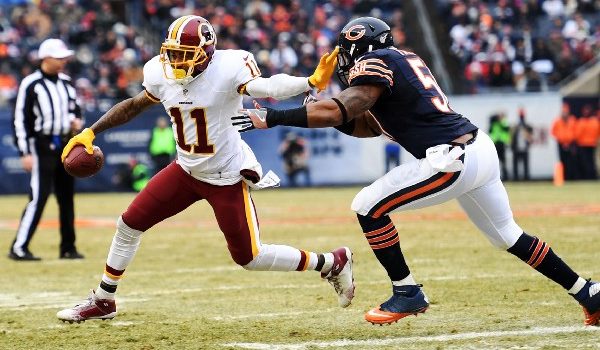 So, free agency officially begins today at 4 p.m., and the Eagles have their sights on two wide receivers:

Bears receiver Alshon Jeffery is expected to be the most expensive pass catcher on the 2017 market.

He stands 6-3 and 218 pounds, but at times he seems even bigger. He’s a force on contested throws and a threat in high-leverage situations (on third downs and near the goal line), exactly the type of receiver who can make a quarterback look better than he is. Still, he has concerns.

He’s missed 17 games in five NFL seasons, and even that number doesn’t fully speak to his overall health concerns. There have been plenty of stretches since 2012 during which he has played through injury, and his history of lower-body ailments should worry any team considering giving him top-of-the-market money.

Former Eagles receiver DeSean Jackson (above) is probably second on most free-agent wideout lists, with a likely asking price around $12 million per season.

Jackson’s speed makes him a game-altering weapon capable of devastating a defense at any moment, but he also turns 31 in December and hasn’t caught more than 56 passes in a season since 2013.

While Jackson’s brand of usefulness to an offense makes that statistic less worrisome than it would be for other wideouts, it also raises an interesting point: If Jackson’s value is largely derived from his ability to take the top of a defense, then maybe there’s a way for teams to add that element — albeit a lesser version of it — in a player without the profile or price tag.