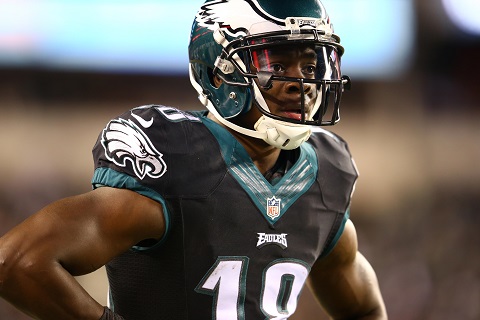 NFL free agency starts Tuesday, March 10, and the league is all in a tizzy about what each team should do.

Nowhere does the tizziness reach a higher and louder threshold than in Eagles Nation.

And the only common message in the Nation is this:

Jeremy Maclin must be re-signed.

He is a fine receiver — not a great receiver, let’s be sure to say — but he is an important thread to what the Eagles used to be and what they will be.

He took a gamble and stayed with the Birds last season for a measly $5.5 million when he could have held out for several seasons. And he stepped up and had a great season.

Here are the other Philly free agents:

Only one thing is assured — now that Chip Kelly has claimed total control of personnel, he’s going to do things his way regardless of popular opinion and maybe even the ones inside his locker room.
Kelly has taken a sledgehammer to the roster, and the pending trade of RB LeSean McCoy for Bills LB Kiko Alonso might create additional cap space if LB DeMeco Ryans, who will presumably lose his starting role to Alonso, is cast off. The Eagles only have a few questions heading into next week, namely who will be throwing, catching and running the ball? But Kelly could have $50 million to play with by that time.

At this point, it would almost be an upset if Kelly doesn’t acquire Oregon’s Marcus Mariota by draft day. Otherwise, he’s not going to find a better option than incumbent QB Nick Foles in free agency. A year after releasing WR DeSean Jackson, it’s surprising the Eagles haven’t locked up Maclin, though maybe they’ll woo shiftier Randall Cobb, potentially a nice fit in Kelly’s system.

Would Kelly would stick his neck out for players like Ray Rice and Greg Hardy to fill the gaps. He’ll definitely need to earmark some of his cap windfall for a pass rusher (Brian Orakpo?) and probably two corners, with the Seahawks’ Byron Maxwell a logical target.