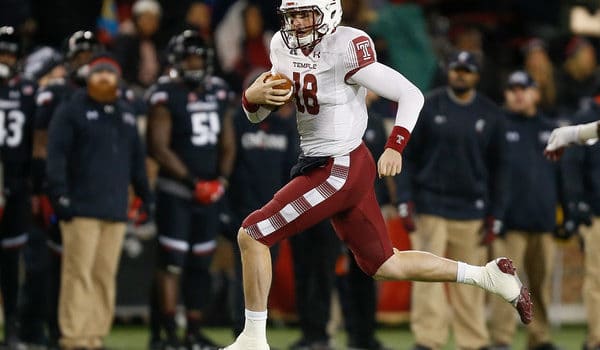 TO BE FRANK: TEMPLE’S BOWL HOPES REST ON NUTILE!

Temple takes on No. 14-ranked UCF today at the Linc at noon, and the Owls’ quarterback is about the only shot they have to pull an upset.

After spending most of the first half of the season searching for a quarterback, first-year Temple coach Geoff Collins has found one in Frank Nutile.

The junior took over as starter three games ago and has passed for 803 yards since, helping the Owls go 2-1 and move to within one victory of bowl eligibility.

“He brings some leadership ability, some poise,” Collins said. “He gets us in the right plays, right protections, and does a really nice job of distributing the ball to our playmakers. As a leader he’s in the special teams huddles. He’s over there congratulating the defense or even firing the defense up before they take the field.”