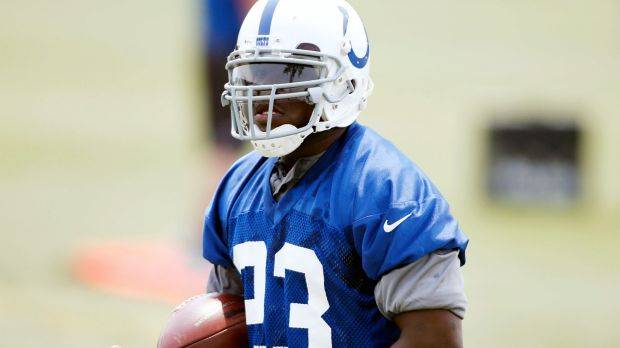 FRANK GORE, WHO MIGHT HAVE BEEN AN EAGLE, AT LINC THIS SUNDAY!

This Sunday’s Eagles-Colts first 2015 preseason game will be the first chance many Birds fans have to gauge how well coach Chip Kelly’s moves as Supreme Leader have been.

Namely, Frank Gore, the San Francisco 49ers running back who had committed to the Eagles as a free agent only to pull away and sign in Indy.

The book on Gore has long been that he absolutely loves the game of football. If he didn’t, he’d probably be out of the league by now because it requires an incredible amount of discipline to put his body through the rigors of training with younger players in Miami each offseason, trying to prove to himself he can keep up with them.

Gore also proved it to the Colts this offseason. General manager Ryan Grigson said the current Colts regime, which formed in 2012 when the club hired Chuck Pagano as coach, had a firm rule of not signing a running back who’d crossed the age of 30.

“Honestly, we never wanted a back even close to 30,” Grigson said. “But the first mention of Frank Gore’s name, that all went out the window. I said Frank Gore’s name and (owner Jim Irsay) got all excited.”

There were a few reasons the Colts waived their over-30 rule for Gore. One was the fact he hasn’t missed a game since 2010. Another was how he closed last season with 302 yards on 51 carries over the final two games to finish with 1,106 yards — his eighth 1,000-yard season in the last nine years. And there was familiarity with him via Pagano’s Miami connections and via Jimmy Raye II, a 49ers assistant coach from 2009-10 and the father of Colts vice president of football operations Jimmy Raye III.

Still, despite the Colts’ interest, it appeared Gore was headed to Philly to join the Eagles. Reports were he’d agreed to a deal with Philly, even though it was during the three-day waiting period when free agents technically can’t speak with teams or finalize a deal. Gore said he was in Las Vegas at the time and didn’t have a conversation with the Eagles “until I was about to come here” and sign with the Colts.

FOX Sports reported at the time Gore had several concerns about joining the Eagles. One of them was, at the time, the team was cutting veterans like guard Todd Herremans and linebacker Trent Cole (now members of the Colts), trading running back LeSean McCoy and letting wide receiver Jeremy Maclin leave via free agency.

The Eagles would eventually make their moves, but Gore and fellow Miami Hurricane Andre Johnson saw an opportunity to join a team on the rise that’s loaded with offensive weapons and with Andrew Luck at quarterback. So that’s what both ultimately decided to do.

“The quarterback, man. He’s the real deal,” Gore said. “I can just tell by the huddle. He runs the show. When you’re around him, yeah, he’s different. Like in the offseason, he doesn’t need a coach. He respects the coaches, but he’s like a coach on the field.”