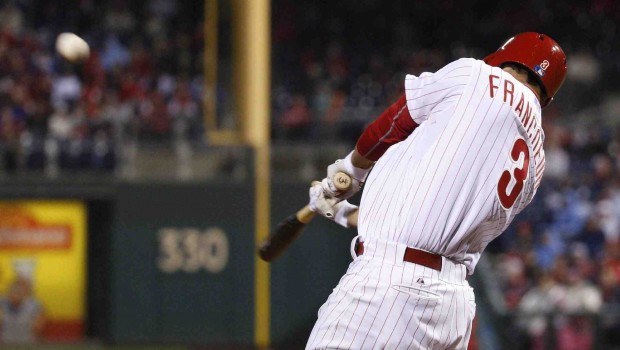 You’ve got to hand it to Jeff Francoeur.

He was all but out of baseball, but he persevered, even pitching in the minors to get another shot in the show.

And last night he paid off for the Phillies with a three-run homer, which supported Aaron Harang, who took a one-hitter into the seventh inning, and the Phillies beat the Boston Red Sox 4-2.

“It was nice,” Francoeur said of circling the bases. “It was a lot of hard work last year, makes you appreciate being back here and you don’t want to miss the opportunity.”

“One big mistake was the difference,” Porcello said.

Harang (1-0) gave up two hits, walked one and struck out eight in 6 1-3 innings in his first start for the Phillies. Jonathan Papelbon got four outs against his former team for his first save.

A fired-up Papelbon pumped his fist after striking out Xander Bogaerts for the final out. Then the mercurial closer faced a barrage of questions from reporters after he told a Boston writer before the game that he “don’t really feel much like a Phillie.”

“What is a Phillie? Is it a horse? I feel like a horse,” Papelbon said, confusing the team’s nickname with filly, a young female horse. “The Red Sox run deep in my blood because that’s where I grew up and became a pitcher.”

Papelbon played seven seasons in Boston, won a World Series and holds the franchise record for saves with 219. He says it’s “obvious” the Red Sox didn’t want him back, so he signed a $50 million, four-year deal with the Phillies in November 2012. He’s six saves away from setting their franchise record.

Bogaerts hit an RBI single off Ken Giles in the eighth to cut it to 4-1. Giles struck out pinch-hitter David Ortiz with two runners on for the first out. But he walked Pablo Sandoval to force in a run with two outs.

Papelbon entered and retired Hanley Ramirez on a deep drive to left with the bases loaded to end the inning. Ramirez hit two homers, including a grand slam in Boston’s 8-0 win on opening day.

“It was hit pretty good,” Phillies manager Ryne Sandberg said, thankful the wind kept it in the park. “It was the wrong night.”

The Red Sox got Porcello from Detroit in an offseason trade for slugger Yoenis Cespedes. They made sure he wouldn’t test free agency after the season by giving him the most lucrative contract for a pitcher in franchise history.

Porcello ran into trouble in the sixth when he walked Darin Ruf on a close 3-2 pitch. Cody Asche followed with a single. Francoeur then drove one out to left-center for Philadelphia’s first runs this season and his first homer since June 16, 2013, for Kansas City at Tampa.

Francoeur bounced around the majors in recent years and even tried pitching for San Diego’s Triple-A team last year. He was on the bubble to make the Phillies’ roster until the final day and got the start in right field against Porcello instead of left-handed hitting Grady Sizemore because he was 7 for 19 against him entering the game.

Chase Utley’s sacrifice fly in the seventh inning made it 4-0.