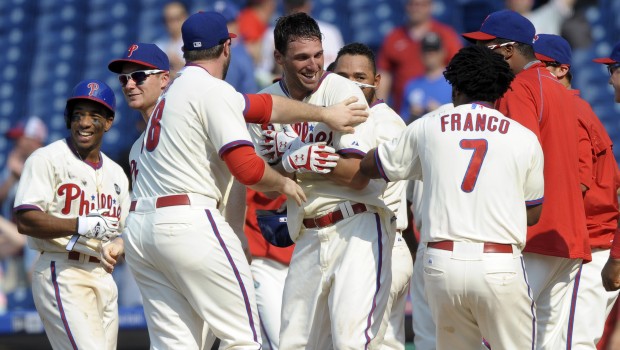 Okay, it was a bit of hyperbole.

Uttered by a guy who had just hot a walk-off home run that gave the Phillies a three-game sweep of the Miami Marlins.

But you’ve got to hand it to Jeff Francoeur for his chutzpah:

“We probably have the best record in baseball in the second half,” Francoeur (middle of photo above) bragged with a big smile following an 8-7 win at Citizens Bank Park.

The Phillies still are 30 games under .500 with a major-league worst 32-62 record, but this weekend was fun for them.

“It was good to see everybody hit this weekend and the pitching do well for the most part,” Francoeur said.

On a scorching hot 93-degree afternoon, Francoeur had trouble dealing with the heat.

“And I played just the last three innings,” he said.

The platoon outfielder first game up big in the seventh when he hit a leadoff single and scored a run that put the Phillies ahead 6-5.

Two innings later, after Miami scored twice on Ken Giles in the eighth to pull ahead 8-7, Carlos Ruiz started the Phillies ninth with a walk, then Francoeur won it with a line-drive homer to left off Marlins closer A.J. Ramos, his third career walk-off blast and first since 2008 when he was with Atlanta.

“That was nice,” Francoeur said. “Any time you can get a walk-off home run, it’s nice … especially when you hit it and you know right away. That’s even better.”

He definitely knew at the crack of the bat.

“Sure,” he said with another smile.

Francoeur, 31, has been one of the Phillies’ top players this season after signing a minor-league contract with them last winter. In 70 games, he’s hitting .257 with eight homers and 31 RBIs, plus he’s 8-for-16 as a pinch-hitter and quickly became a team leader.

“I know everybody in the clubhouse looks up to him,” Phils interim manager Pete Mackanin said. “He has a lot of energy and he’s great in the clubhouse. He plays the game hard. He does everything the right way.”

A former All-Star, Francoeur could be moved before baseball’s July 31 trade deadline, but he campaigned to stay with the Phillies for the second time this weekend following his game-winning homer.

“I let them know that I really like it here, but I know it’s a business and at the same time, if it happens, it happens,” Francoeur said. “I’m going to enjoy today and this weekend.”