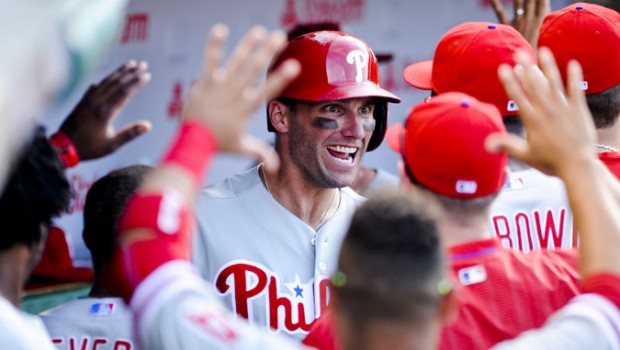 It’s good to be a grizzled veteran who has been traded around baseball a bit and developed experience with the habits of former teammates.

Just ask the Phillies’ Jeff Francoeur, who hit a two-run homer off his former Atlanta Braves teammate Rafael Soriano with two outs in the 10th inning, rallying the Phillies, who had to tied the game in the ninth, past the Chicago Cubs 5-3 on Friday.

After fouling off a first-pitch slider, Francoeur drove his game-winner deep into the bleachers off Soriano, whose 0-1 slider caught a little bit too much of the plate.

Soriano came in for James Russell (0-2), who gave up a leadoff single to Cesar Hernandez in the 10th.

Following a groundout by Maikel Franco, Francoeur, who went 2 for 5 with a double and the home run – stepped to the plate prepared.

”I know Soriano likes to go away,” said Francoeur, who delivered his second-game-winning home run this week. ”(After the first pitch), I just said, ‘Stop trying to do something and just see the ball and hit the ball.”’

Jonathan Papelbon pitched the 10th for the Phils and earned his 17th save in as many opportunities afterKen Giles (5-2) worked the ninth inning.

The Phillies, who won for the sixth time in seven games since the All-Star break, tied the game in the ninth when Cody Asche delivered his second RBI double of the game off closer Jason Motte.

”I don’t know what it is, but the guys are playing well,” Phillies interim manager Pete Mackanin said. ”There’s a few mistakes here and there, but there are so many positives that are going on.”

Motte, who blew his first save in seven chances, stranded the go-ahead run at second by getting pinch-hitters Odubel Herrera andCarlos Ruiz to fly out.

By then, the damage had been done.

Chris Coghlan’s two-run homer in the fourth inning off Phillies starter Jerome Williams erased a one-run deficit and gave the Cubs a 3-2 lead that stood until the ninth when Asche tied the game with his double.

Williams, making his first start since coming off the disabled list July 21, gave up three earned runs over six innings, scattering six hits, including homers to Kris Bryant and Coghlan. Williams struck out four while walking one.

The Phillies took a 2-1 lead in the fourth inning when they strung together three hits off starter Jon Lester, capped by Asche’s two-out, two-run double.

Lester gave up seven hits and two earned runs over seven innings with one walk and two strikeouts. He was coming off an outing last week against Atlanta when he allowed only two hits over 7 1-3 innings.

Bryant gave the Cubs a 1-0 lead in the third with a solo home run. The star rookie third baseman had been struggling and was 4 for 28 since the All-Star break – before hitting his 13th homer of the season.