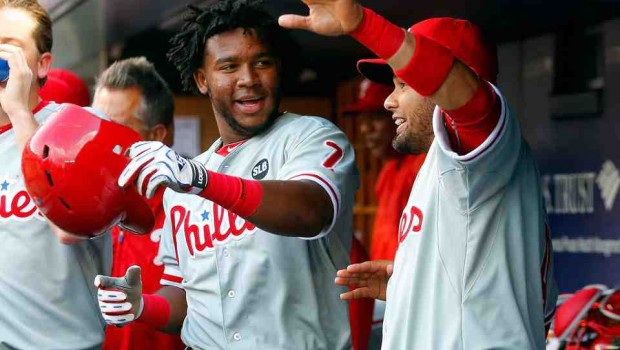 Has anyone ever had a better first game in Yankee Stadium than the Phillies’ Maikel Franco did Monday night.

Not the old Stadium that was the House that Ruth Built.

But this six-year old version, which could barely contain the Phillies’ rookie hitting sensation. Franco fulfilled his childhood dream Monday night, making his Yankee Stadium debut in the Phillies’ 11-8 win over the Yankees. He made sure it would be a night to remember, going 4-for-5 with two home runs and a career-high five RBI to help snap the Phillies’ 12-game road losing streak.

Franco has provided a much-needed jolt to the Phillies’ otherwise anemic lineup since being called up from Triple-A Lehigh Valley on May 15. Over his last 21 games, Franco is batting .390 (32-for-82) with seven home runs, seven doubles and 16 RBI.

“He’s been our most consistent and productive hitter on a daily basis with driving the ball and stinging it and a threat,” manager Ryne Sandberg said of the rookie third baseman. “He’s been the guy for a couple weeks now.”

In his first plate appearance, Franco crushed a two-out solo home run to left field off Yankees right-hander Michael Pineda, giving the Phillies an early 1-0 lead in the top of the first.

Franco added a two-run single to right-center in the fourth and then continued his onslaught on Yankees pitchers by slugging his second homer of the night in the sixth. With Sandberg giving him the green light on a 3-0 count, Franco hammered a monster two-run shot to left off Chris Capuano, putting the Phillies ahead, 10-5. It was the first multi-home run game of Franco’s career.

“He’s got everything you look for in a young player,” said Phillies starter Kevin Correia, who allowed five earned runs in four innings and came away with a no-decision. “He’s got similarities to [Albert] Pujols in his mechanics. Pretty amazing at this point in his career.”

Franco capped his career night by making a terrific defensive play to rob Chris Young of a leadoff base hit in the seventh. When Young smacked a sharp grounder to third, Franco dove to make a backhanded stop and then fired to first to record the out.

Even the bright lights of Yankee Stadium weren’t enough to faze the 22-year-old Franco, who said he wasn’t really nervous to finally be playing in the Bronx.

“I just go out there and play the game, play baseball,” Franco said. “I know it’s a good stadium, but I know it’s a home run ballpark, so when I go out there I just tried to do the best I can and just be ready for everything.”