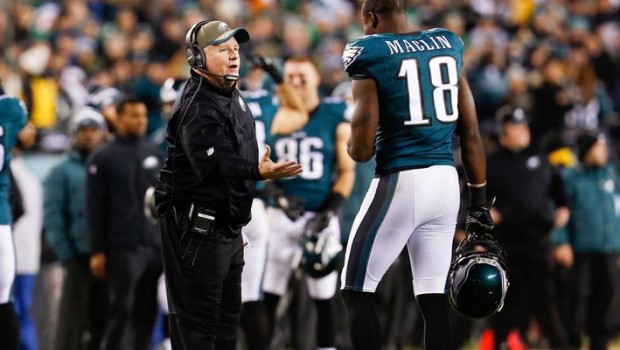 WHY ‘FRANCHISING’ MACLIN IS A BAD IDEA FOR THE EAGLES

Chip Kelly runs the risk of having a pissed-off Jeremy Maclin as his best wide receiver in 2015.

The Eagles have a decision to make in the next six days that will have a profound impact on their chances to go deep in the playoffs next season, let alone make it to the Super Bowl.

The team needs to decide if it wants to hang a “franchise” tag around their elite receiver Jeremy Maclin or let him test the free agent market.

A “franchise” means that Maclin will make a 2015 salary that is the average of other elite receivers, and that number is undoubtedly lower than the figure Maclin and his agent want.

“Franchise” designates start on Feb. 16 and the free agent market opens on March 10.

The Eagles and Maclin would likely prefer a long-term agreement after the latter produced the best season of his career in his first year with Chip Kelly’s offense. If a long-term deal can’t be reached by the start of free agency, the Eagles may opt to place the franchise tag on him to keep Maclin away from other teams while they continue to negotiate.

Maclin bet on himself with a one-year deal last offseason after missing the entire 2013 season due to an ACL tear. That wager worked out as caught 85 passes for 1,318 receiving yards and 10 touchdowns. Maclin was voted an alternate to the Pro Bowl and finished second to Rob Gronkowski for the NFL Comeback Player of the Year award.

Maclin is likely to want an annual salary exceeding $10 million and the Eagles have the cap space to offer that sum. However, Maclin may want more than the Eagles want to offer, so the team may want to block him from free agency while they try to reach a middle ground.

While this is one of the better free agency and draft classes for wide receivers in recent memory, Maclin seems to fit exactly what Kelly wants to do. Going even further, had Maclin gone down last season, this team probably wouldn’t have come as close as it did to the playoffs.