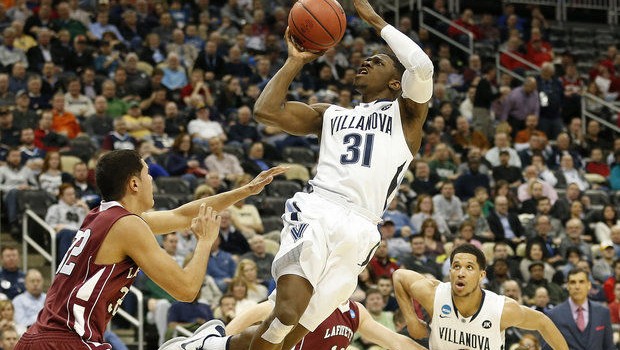 The most intriguing element in last night’s Villanova’s thumping of Lafayette occurred at 18:27 of the first half when the officials stopped the game for an apparent clock issue.

And that’s because — for all the talk about Leopards’ coach Fran O’Hanlon going up against his alma mater — Lafayette really had no chance against the Wildcats, who looked like are preparing to go Indy for the Final Four.

Villanova exploeded to leads of 11-2, 34-13 and 63-30 on its way to a 16th consecutive victory, longest in the long, distinguished history of ’Nova basketball.

“Villanova coach Jay Wright wasn’t feeling bullish before the game mostly because in a home game last year against this almost identical Lafayette team, the Wildcats found themselves behind in the second half. He needn’t have worried.

Villanova shot so well (63 percent) and with such offensive balance that Lafayette’s eclectic roster (the Leopards hail from nine states and three foreign countries if you include Texas) never took a hopeful breath Thursday night.

“The funnest part was when it was over,” said Lafayette coach Fran O’Hanlon. “Then I could go back to being a Villanova fan again.”

Someone then asked O’Hanlon, whose team had just lost by 41, whether Villanova is scarier in person than on film.

The box score from Thursday night was itself frightening:

They should be fresh for the remainder of the weekend because none of them played even 30 minutes.

“It wasn’t really a point of emphasis,” said the 6-foot-11 Ochefu regarding Villanova’s distribution. “We’re a good offensive team and we share the ball. We worked on that all year in practice, and it wasn’t any different in this game.”

“We all know that we are judged on getting to that second weekend,” said Wright. “I think the coaches probably have to answer to that more than the players do. I think the players look at it as the next NCAA game. It’s a big game. I could tell our guys were fired up for this game because it’s the NCAA tournament. They weren’t thinking [No. 1] seed. They weren’t thinking, ‘We could be the first No. 1 to lose to a No. 16.’ They don’t think about that stuff.”