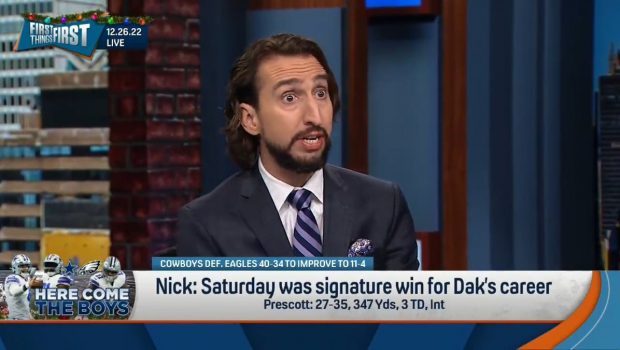 FOX FOOL (NEVER) WRIGHT: BIRDS WILL BE 1-AND-DONE IN PLAYOFFS!

Colin Cowherd, another fool, was out yesterday, so Eagles-hater Nick (Never) Wright filled in:

“I watched the Eagles on Sunday and I think I’d be pretty nervous if I were them. They forced a turnover on one of the very first plays of the game and converted it into points, they score 27 more with their backup quarterback and 34 overall, they sacked Dak a half dozen times, and they STILL lost and allowed 40.

“You can’t put it on Minshew. I understand Minshew had the three turnovers but he didn’t play poorly. Two of those turnovers were just terrible luck or great plays by Dallas.

“Maybe this game goes different if Jalen Hurts is playing, but maybe the first game goes different is Dak if playing instead of Cooper Rush. The reason I’d be nervous if I was Philly — it’s not just your quarterback is hurt, and it’s not just because you lost Avonte Maddux, it’s also because Lane Johnson, who has been the best player on your team arguably since the Super Bowl, is out for at least the rest of the regular season, and you’ll get the No. 1 seed but potentially Jalen is going to go more than a month without playing.

“Then in Round 2 you’re likely playing this Cowboys team who just scored 40 on you, and if you play the Bucs, they’re the team who annihilated you in the playoffs last year.

“I know Philly fans don’t want to hear it but I think it’s more likely that Philly is a one seed one-and-done like the Titans last year, or the Ravens a couple years ago, than they are the NFC Super Bowl representative.

“The Hurts injury worries me, the Lane Johnson injury is devastating, the defense is getting more and more banged up, and as good as they are getting to the passer and forcing turnovers, that secondary can get ‘got’ over the top, that’s been a problem for them all year. When they’re not getting the quarterback on the ground or picking the ball off they can get got over the top and I’d be nervous as an Eagles fan.”

Eagles fans, @GetNickWright has warned you…

"I think it's more likely Philly is a one seed one-and-done than they are the NFC Super Bowl representative." pic.twitter.com/Pef3mbuAEW