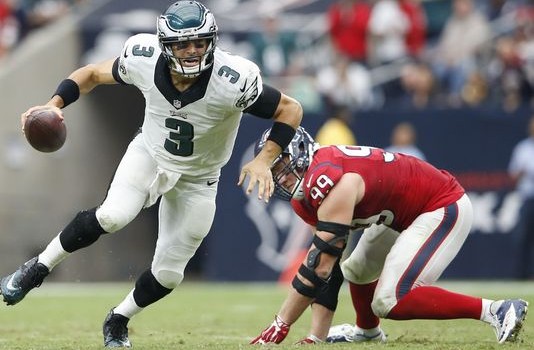 FOX ANALYST GETS IT WAY WRONG — SANCHEZ WAS MORE THAN READY

If you watched Sunday’s Eagles victory over the Houston Texans with the sound on, you were subjected to the brain-dead commentary of Fox Sports’ Daryl Johnston, who earned his nickname of Moose.

When Nick Foles went down with a shoulder injury, Mark Sanchez replaced him and for the next hour here was what Moose told us, paraphrasing: “Chip Kelly is really going to be tested now because he is going to have to change his play-calling for Sanchez. As a back-up, he doesn’t get many reps in practice so it will be interesting to see how conservative Kelly will become to adjust to Sanchez’ limited repertoire.”

What Johnston didn’t know (but should have) is that Kelly gives reps to everybody on his 53-man roster, especially Sanchez.

Kelly didn’t have to adjust to Sanchez, a seven-year vet who took the New York Jets to two AFC title games.

Sanchez was the next man up on Sunday, and did everything the Eagles could have asked for, going 15 of 22 for 202 yards, two touchdowns and two interceptions. Although the interceptions were a bit concerning, Sanchez still lead the team on three scoring drives, including a crucial one late in the fourth quarter to put the game away.

“You have a little butterflies,” Sanchez said of going in.

The extended action on Sunday was the first time Sanchez has seen the field in the regular season since he played for the New York Jets in the final game of the 2012 season.

“You gotta stay ready,” Sanchez said. “All of our offensive coaches do a great job of making sure all of our guys get reps. I stand behind Nick on every offensive rep (at practice) making sure I am ready. You never want to get caught off guard. I’m happy I prepared well and happy I was able to help the team.”

Sanchez helped the team almost immediately, coming in and hitting receiver Jeremy Maclin on his first play for 52 yards. Two plays later, Sanchez found receiver Jordan Matthews in the back of the end zone for his first touchdown of the day.

“If Kelly was a basketball coach, he would put his subs in and tell them to shoot,” Sanchez joked after the game of the aggressive play calls. “I was expecting maybe a handoff or a screen.”

With Foles likely out for at least a month, Sanchez will get his first start with the team in primetime on Monday Night Football.

The argument can be made that the league exposed Sanchez during his final years with the Jets, as he went from making deep runs in the playoffs his first two seasons to going 6-9 as a starter with 18 interceptions in his final season.

On Sunday, Sanchez showed signs of being a better player than he was towards the end of his career in New York. If the Eagles want to keep contending in the NFC, and Foles is out for an extended amount of time, they better hope that continues to be the case.