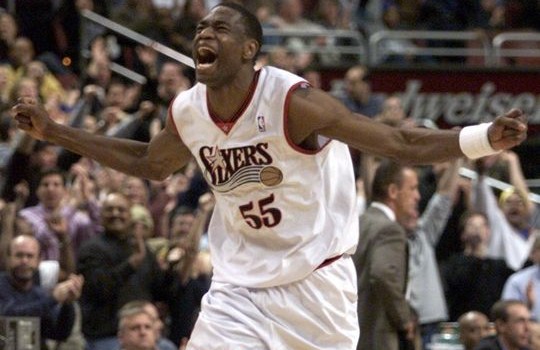 FORMER SIXER MUTOMBO A FINALIST FOR HALL OF FAME

Who was it who said:

Well, one nice guy who helped the Sixers to the NBA Finals in 2001 can prove him wrong.

The Naismith Memorial Basketball Hall of Fame announced finalists for the class of 2015: Dikembe Mutombo (photo above), the center on the Allen Iverson-led 2001 Sixers that gave the champion Lakers all they could handle, made it.

And so did urrent Kentucky Wildcats coach John Calipari.

Finalists will need at least 18 of 24 votes from the honors committee to be inducted into the Hall of Fame in August. The entire class will be announced April 6 prior to the NCAA men’s championship game in Indianapolis.

Heinsohn was a 1986 inductee of the Naismith Memorial Basketball Hall of Fame as a player. He’s the fourth person to join the Hall as a player and coach.

Isaacs, an enshrinee of the New York City Basketball Hall of Fame (1992), played for the New York Renaissance, the Washington Bears, along with several other teams. He led the Renaissance to the first-ever World Professional Basketball Tournament Championship in 1939.

Raveling was an All-American player at Villanova and is known as former basketball coach who helped break racial barriers in the game. In 1963, he received an original copy of Martin Luther King Jr.’s “I Have a Dream” speech. He is currently Nike’s global basketball marketing director.

The ceremonies will take place in Springfield, Mass., on Sept. 10-11.