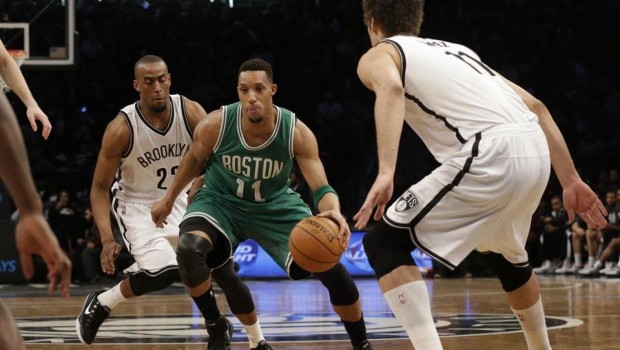 It might be too soon to call former Sixer Evan Turner a total NBA washout.

He performed just adequately for the Sixers after being taken with the No. 2 pick in the 2010 NBA draft, but his constant whining to refs and terrible shot caused him to be traded to Indy last season, where he also failed.

But now he is in Boston and if this week is any indication he might have found his NBA niche.

Turner responded from a putrid stretch to play some of his best basketball during the Celtics’ recent playoff push.

That was punctuated by his triple-double in Monday’s win over the Brooklyn Nets, his second in a span of 15 games after none the first 361 games of his NBA career. It was apparent in the early going Monday that Turner was offensively aggressive.

There are some nights in which Turner’s line-drive jumper hits nothing but net, and there are others when that jumper has been erratic. In February, Turner shot 30.4 percent from the field and missed 17 of 20 3-point attempts. In March, those numbers have risen to 45.4 percent and 7 for 23 from long range, which never has been his strength.

What does make Turner a weapon is his versatility and ability to distribute the ball. He is averaging a career-best 5.1 assists this season, and since the training camp injury to Rajon Rondo turned Turner into the team’s primary point guard, he has worked on trying to facilitate.

“With the assists, you have to have teammates make the shots,” he said. “That’s definitely been happening. I grew up playing with the ball in my hands and it’s been more advantageous for me. That’s what I got drafted so high off of, playing the point guard position. It definitely helped. My teammates made great plays and it makes me look better than I actually did.”

Since Turner is more of a scorer than a shooter, he has picked and chosen his moments to initiate his own offense. In the past three games, he is 26 for 45 shooting and averaging 19.6 points. There have been games such as at Indiana (1 for 7, 4 points) and Memphis (1 for 6, 4 points) that Turner has been passive. But in between those two Celtics victories, Turner went for a season-high 30 points in a victory over Orlando.

“He knows how to play and every night he fills the box score,’’ Celtics coach Brad Stevens said Monday night. “He was really good with the ball, good making decisions off pick-and-roll. You could tell he was aggressive from the start. He’s a good player. We need everybody to play well, and he played well.

Stevens said he does not ask Turner to pick and choose his moments to score. He wants more consistent aggression.

“I think the biggest thing we can do is encourage him to be aggressive all the time,” Stevens said. “He very conscientious about making the right play, which sometimes can be a fault because he wants to be a great teammate. He wants to make the right read and the right pass and sometimes he hesitates as a result and doesn’t look for his shot. We want him to be aggressive coming off that pick-and-roll to score.”