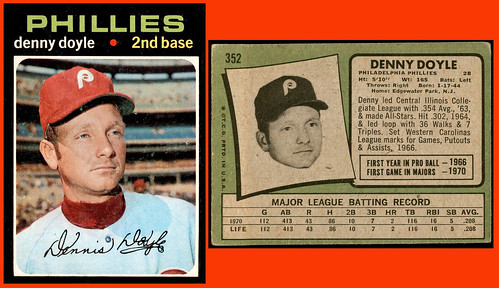 Former Phillies infielder Denny Doyle has passed away at the age of 78.

Doyle appeared in parts of eight big league seasons during the 1970s.

A Kentucky native, he attended Morehead State before signing with the Phillies in 1966. He’d play four years in the minors before cracking the majors a bit after his 26th birthday in 1970. Doyle would work as the Phils primary second baseman for his first four MLB seasons.

The Phillies traded Doyle to the Angels after the 1973 season. He spent the ’74 campaign with California, and he’d remain there through the first few months of the following season. In June, the Angels dealt him to the Red Sox for a player to be named later (eventually minor league pitcher Chuck Ross). That move paid off for Boston, as Doyle hit .310/.339/.429 in 89 games down the stretch. He received some down ballot MVP votes for his performance and, more importantly, earned a key role on the Sox’s 1975 pennant-winning team.

Doyle appeared in and picked up a hit in all seven games of that year’s World Series showdown with the Reds, one of the most iconic series in MLB history. Boston would come up short in that set, relinquishing a three-run lead late in the decisive Game 7 and losing 4-3 on a two-out RBI single by Joe Morgan in the top half of the ninth. Doyle went 8-30 with a pair of walks and one strikeout in that series.

Doyle’s brothers Brian Doyle and Blake Doyle have also had roles in MLB. Brian played in parts of four seasons with the Yankees and A’s from 1978-81, while Blake served as hitting coach of the Rockies during the mid-2010’s. MLBTR sends our condolences to them and the entire Doyle family, as well as Denny Doyle’s friends, former teammates and loved ones.