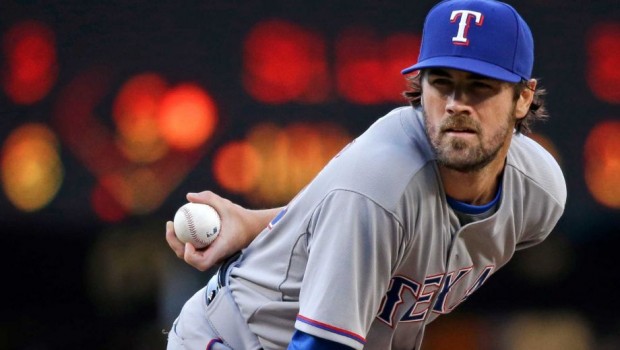 IS FORMER PHILLIES ACE COLE HAMELS OVER THE HILL?

He keeps talking about his latest failure with:

In Hamels’ case, The American League is still giving him fits, especially after getting shelled for the fourth time in his last five starts going back to when he pitched for the Phillies.

The only exception was his no-hitter against the Cubs on July 25.

In his first start against an AL team since joining the Rangers after a trade from the Phils 10 days ago, Hamels on Friday was susceptible to the home run in a pitcher-friendly AL park and proved unable to hold a middle innings lead. He balked in one run and allowed three bases-empty homers to turn a two-run lead in to a 4-3 loss to Seattle.

The loss didn’t cost the Rangers in the AL West, but did cost them a game in the wild card standings. They now trail blazing hot Toronto by 3.5 games for the second wild card spot.

Hamels took a 3-1 lead to the bottom of the fifth, but then allowed a leadoff homer to Mark Trumbo. In the sixth, he allowed a game-tying homer to Nelson Cruz to start the inning and then a go-ahead homer to the next batter, Robinson Cano. Hamels fell behind in the count to both Cano and Cruz.

“I’ve got to do a better job of holding the lead,” Hamels said. “I can’t get behind key hitters and let them get into favorable counts. I have to be able to establish the strike early and not let them get into a comfortable position. I think I was trying to be too fine early in the count and you find yourself behind in the count. The hitter can look for a better to pitch that he can do some damage with. It’s definitely my fault.”

For his career, Hamels has allowed an average of 1.49 homers per nine innings when facing AL teams or pitching under AL rules. Against NL teams: 0.93. In 13 regular-season starts under AL rules, Hamels is 3-7 with a 5.72 ERA.

Hamels has allowed five homers in 13.2 innings over two starts for the Rangers.

On Friday, Hamels simply left too many pitches up in the hitting zone to the Mariners’ most dangerous hitters. All three homers were at or above the belt, including a flat changeup to Cruz. After the Cruz homer, he fell behind 3-1 to Cano before having to challenge him with a strike. The strike was a 93 mph fastball centered in the zone.

It doesn’t matter what league you are pitching in, that’s never a good idea.