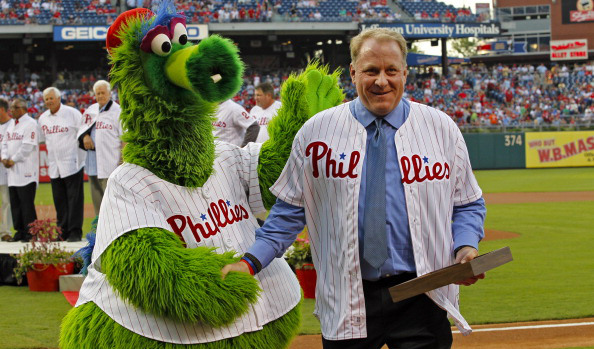 FORMER PHILLIE SCHILLING MAKES A FOOL OF HIMSELF — YET AGAIN!

Schilling with the Phillie Phanatic, who probably has sounder political judgment.

It is always comical when athletes feel that their celebrity makes them experts on science, culture or politics.

Sure anyone in this great country can utter an opinion — where would cable TV be without the First Amendment? — but when former Phillies pitcher Curt Schilling, whose IQ is scraping triple digits, takes to Twitter the results are delicious.

Schilling criticized President Obama who would not commit to screening the movie “The Interview.” Schilling further decided that such a thing is the litmus test for a good president and let his followers know it:

Hmm. Sure about that, Schill? Because here’s what the White House museum website says:

Ronald Reagan watched very few films at the White House. He and Nancy watched most of their movies on their weekends at Camp David, preferring Jimmy Stewart movies, High Noon (the president’s favorite), and, on special occasions such as the president’s birthday, his own films.

“High Noon” and most Jimmy Stewart movies are classics. “The Interview,” despite the fact that it accidentally became a political cause in the past couple of weeks, is certainly not in their class.

Would Reagan have put James Franco and Seth Rogen in Jimmy Stewart’s class?