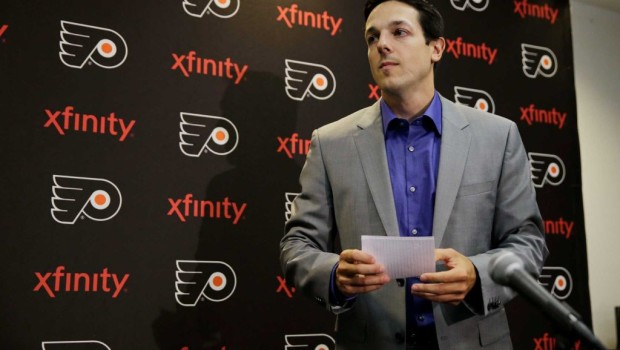 As a society, we have become used to public figures announcing retirements with the reason: Wanted to Spend More Time With My Family.

And in our skepticism, we roll our eyes:

Have you asked your family about that!?

But in Danny Briere’s case, it seems legitimate.

Flanked by three sons that he rarely saw the last two years as he bounced from team to team, Briere made his retirement official Tuesday, ending the career of an undersized center who often came up big in the playoffs.

Briere spared the tears usually fit for a retirement ceremony and asked his three sons to join him against a Flyers’ backdrop. His boys Caelan (17), Carson (15) and Cameron (14) stepped up for a family photo, dad beaming wider than he did the first time he slipped on a Flyers jersey.

”The priority is going to be family first,” Briere said.

With two of them playing hockey and one playing lacrosse, Briere has games and practices to hit in retirement.

”There’s a lot of perks of having your dad play in the NHL,” said Briere, who once signed a $52 million contract with the Flyers. ”But on the flip side, they wanted to have me home.”

Briere will stay near Philly and plans to marry his fiancee, Misha Harrell, next summer. He had some feelers about returning for an 18th season, but after limited minutes each of the last two years with Montreal and Colorado, the decision to hang up the skates was easy.

”It became tough when you’re sitting on the bench and you’re watching other guys,” he said. ”I guess it’s the competitive side. I just wanted to be the guy making the play.”

Generously listed at 5-foot-9, Briere left as one of the smallest players to ever make such a huge impact in the postseason. Not familiar with his postseason scoring punch? Check out the 5 minute, 30 second video on YouTube that highlights all 30 points he scored during the Flyers’ 2010 run toward the Stanley Cup Finals. That stands as a team record for playoff points and four of his goals were game-winners.

Briere had a goal and an assist in one of the great games in franchise history: Philadelphia’s 4-3 win over Boston in Game 7 of in the Eastern Conference semifinals. Down 3-0 in the series, then down 3-0 in Game 7, Briere scored the tying goal that keyed the comeback.

On the brink of elimination, Briere thought the Flyers had wasted their momentum.

”I remember sitting on the bench almost crying,” Briere said.

Briere was whistled for a crosscheck and screamed at referee Stephen Walkom on the way to the box.

”I couldn’t control myself,” Briere said. ”And I sat down in the penalty box and the next whistle he came back over and was like, ‘Calm down. The game is far from over. Just calm down. You don’t want to put your team short another man.”’

His 17-year career saw him play for the Phoenix Coyotes, Buffalo Sabres, Flyers, Montreal Canadiens andColorado Avalanche. Briere spent the bulk of his career with the Sabres and Flyers and earned All-Star nods playing for both franchises.

Briere and the Flyers reached Game 6 of the 2010 Stanley Cup Finals when they lost to Chicago.

”I think signing Danny that day back in 2007 kind of turned things around for us almost immediately,” team president Paul Holmgren said.

Briere spurned the Canadiens, his boyhood favorite team, and angered fans there so much that he was jeered each time he played in Montreal. Booed with such ferociousness, he had to tell his mother to stop coming to games.

But on Feb. 13, 2010, Briere was comfortable enough after three seasons in Philly that he left his mom a pass.

She saw her son in the hotel lobby, gave him a hug and had an uncommon request: ”I know I never ask you anything like this, but can you please score me a goal?”

Briere stuck it to the angry visitors and scored a hat trick in Philadelphia’s 6-2 win.