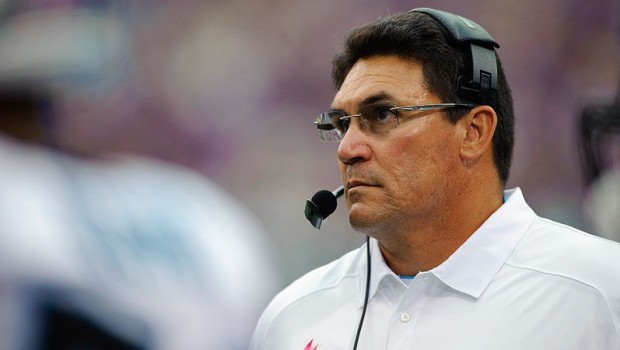 FORMER EAGLES LINEBACKER COACH RIVERA IS COACH OF THE YEAR!

When your team goes 15-1 and wins the NFC title, you’re going to be a pretty tough candidate to beat when it comes to being the choice for coach of the year.

Voters for the Associated Press didn’t overthink things. Panthers coach Ron Rivera has been named the winner of the award at Saturday night’s NFL Honors ceremony in San Francisco.

Former Eagles linebackers coach Ron Rivera is having his moment in the sun at today’s Super Bowl.

The Carolina Panthers’ head coach and member of the ’85 Bears has gotten far, far beyond one of his greatest career disappointments, that of being let go as defensive coordinator by Lovie Smith in the aftermath of the Bears’ Super Bowl XLI loss to Peyton Manning and the Indianapolis Colts.

Fittingly perhaps, Rivera now faces Manning in another Super Bowl, although job security is obviously not in the Rivera discussion now, win or lose on Sunday. (It might be for Manning, but certainly not for Rivera.)

A big part of the feel-good surrounding Rivera and his Panthers being in the Super Bowl is how Rivera has refused to dwell on or even talk extensively about how things ended in Chicago.

But everywhere he’s been, Rivera has been a part of very, very good defenses. In Philadelphia (1999-2003) the Eagles ranked 11th in his first year, then Top 5 in four of his last five years. In Chicago, the defenses ranked 13, 1 and 3.