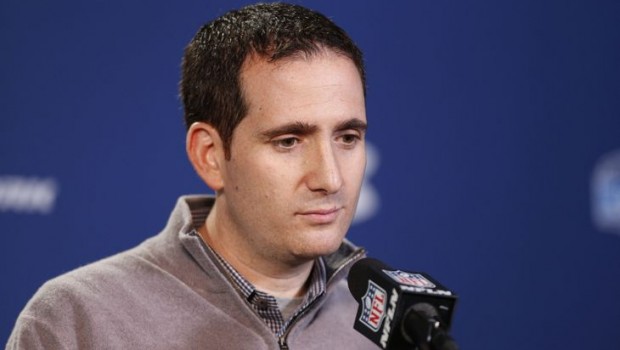 Now that the NFL draft is over and his role on ESPN’s coverage is in the past, former Eagles exec Louis Riddick didn’t wait long to weigh in on the latest changes in the Eagles’ personnel department.

Three members of the scouting department were let go:

Riddick, who did a fine job filling in for Ray Lewis during the draft coverage, said Tuesday that the changes were long overdue.

Riddick, a nine-year NFL player, was Eagles director of pro personnel when he was fired in 2012 by new GM Howie Boy Roseman (photo above), who won the job over Riddick.

“Its important for the people who are in positions of leadership to not create an atmosphere where there’s politics,” Riddick said during an interview with Anthony Gargano on 97.5 FM The Fanatic.

“Not to create an atmosphere of ‘are you with me, or are you with the coaches?’ It’s important that you foster a very positive work environment the people know they’ll never have to choose, compromise your integrity or anything like that. Quite honestly, that is the kind of thing that happens there.

“Ed [Marynowitz] is in the process of finding guys he’s comfortable with, that he trusts, that he knows and that in any way aren’t executing an end around. Or going behind his back. Or possibly trying to undermine anything that he’s trying to accomplish. That’s not taking a shot at anyone who was let go from there, but he’s trying to get comfortable. It’s his right to do that. And quite honestly it needed to happen there. That process will be ongoing, for sure.”

Riddick criticized the organization before, and especially former GM Roseman, who was demoted in January.

After spending five years as an executive in the Eagles’ personnel department, Riddick knows whereof he speaks.

“It doesn’t matter if it’s coaching staff, if it’s personnel,” he said. “You need to eliminate as much politics and as much of the possibility for people to exercise their own agendas as possible. Those sort of things makes your organization rot from the inside out. It manifests itself in your guys not producing. That’s what was happening there.

“When you have it that way, it’s awesome. When you feel like you’re constantly trying to do that little political dance, you spend more time messing around with that BS than you do trying to be a professional. That is tiring. It’s really tiring. They’ve had enough of it.”

As for what Kelly, Marynowitz and the restructured front office were able to pull off in last weekend’s NFL Draft, including picking USC wide receiver Nelson Agholor in the first round and Utah defensive back Eric Rowe in Round 2, Riddick applauds what the Eagles.

“A guy like Nelson Agholor fits exactly what Chip Kelly wants,” Riddick said. “He’s a team-oriented guy. He kind of fits the mold of what he’s looking for. A very selfless player who can do a lot of things and fit a lot of different molds. He’s almost like Jordan Matthews. He can play inside, outside, has durability. He’s perfect for him.

“Eric Rowe is the same way. He can go between corner and safety. Whatever they want him to do, he can.”