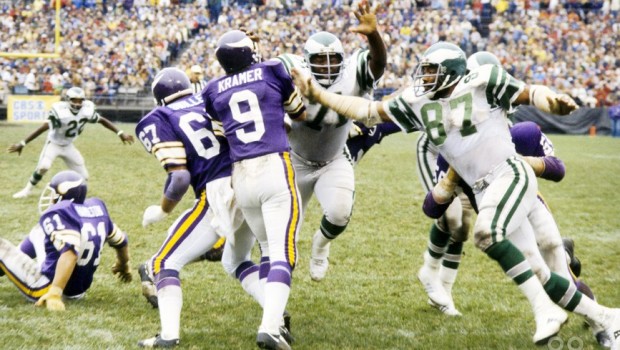 Former Eagles defensive tackle Claude Humphrey was inducted into the Pro Football Hall of Fame yesterday in Canton, O. Here is an excerpt of his acceptance speech: Humphrey (87) sacking a quarterback and carrying Vermeil off the field.

Then came the Philadelphia Eagles. I got traded to the Eagles. I met a man that had better work ethics than I did. I marveled at the way he went about his job. His name is Coach Dick Vermeil. Dick, would you stand? Let the people see you. This man worked tirelessly to take a football team that perhaps may not have been a great football team, but he had a bunch of young guys who really got into what he was preaching, and we ended up going to a Super Bowl. Coach Vermeil and I are still good friends. We talk occasionally. Coach and his wife Carol ended up being just great friends to me. I appreciate Coach.

When I got to Philadelphia, man, what a nice young team. Those guys accepted me. They brought me in. They were like sponges. They wanted to know what it was that I had been doing to get to All-Pro or make All-Pro. But in the morning before practice we would have meeting together, Dick Harrison, Carl Hariston, Charlie Johnson, Ken Clark. We would go in those meetings and that was before the coach got there. Man, what great work we got in.

I got special recognition for president Dr. Glenda Glover, and you saw Tennessee State’s band “Too Tall” Jones, “Too Tall” will be standing before you one day here. And I want to give special recognition to the president and owner of the Atlanta Falcons, Mr. Arthur Blank. Now Mr. Blank I especially want to thank Mr. Blank because Mr. Blank is a major contributor to the Historically Black College Hall of Fame. What a great job that he’s done with that, helping keep black football alive. Mr. Blank, I appreciate it, and a lot of these guys will be seeing you.

So I really thank you. Thomas Dimitroff, the general manager down there, Thomas has done a great job. I want to thank him. I want to thank Kareen Irvin, and special thanks to the Leonard Tose family who was the owner of the Philadelphia Eagles while I was there. Mr. Tose was a great guy, and I just want to remember him as I go along.