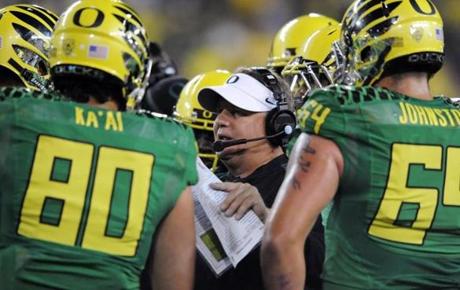 So, now we have another Duck heard from on the subject of Eagles Supreme Leader Chip Kelly!

Carolina Panthers tight end Ed Dickson, who played for Kelly at Oregon from 2007-09, was asked about the Eagles’ coach on Wednesday.

“I don’t like commenting on other teams because I’m a Panther,” Dickson told ESPN.com. “But I know the guy. Personally, I think he’s very powerful and he knows his stuff. He doesn’t like egos, and that’s getting him in trouble a little bit.

“If they can work it out within the team, the Eagles are going to be a very good team if they all can buy into the system.”

Kelly came under fire during the offseason when former Eagles running back LeSean McCoy accused Kelly of getting rid of “all the good black players” from the roster. Another former Eagle, Pittsburgh Steelers cornerback Brandon Boykin, said recently that Kelly is “uncomfortable around grown men of our culture.”

Kelly was Oregon’s offensive coordinator during Dickson’s sophomore and junior seasons, and became the head coach when Dickson was a senior. Dickson, who is black, said race wasn’t an issue for Kelly at Oregon.

“Not at all,” Dickson said. “I never got any sense of that.”