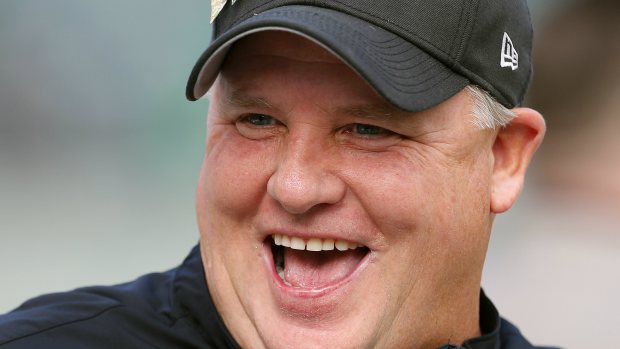 FORMER CHIP ASSISTANT: ‘HE HAS ALWAYS GOTTEN MORE FROM LESS’

In the never-ending battle to permeate the genius/madness of Eagle Supreme Leader Chip Kelly, what passes for the mainstream media have taken to:

Reflexively doubt every move he makes (CSNPhilly.com’s Ray Didinger); and

Railing against Kelly because he doesn’t talk often enough to let us know what he really thinking (probably because even after he talks the clown car media doubts the veracity of what he say!).

But Mark Eckel of NJ.com, has a novel idea:

Talk to someone who has worked for him in the past:

Eddie Morrissey, Princeton University’s assistant football coach, got his start at the University of Oregon under a young, untested offensive coordinator named Kelly.

Morrissey says it’s the best thing that’s happened to him as a coach.

“The education I got football-wise from being at Oregon is second to none,” Morrissey said. “I could never thank (Kelly) enough. It’s the best thing that’s happened in my coaching career. It got me the Fordham job and it got me the Princeton job.”

Morrissey coached at Oregon from 2006-08, moving on to Fordham and now Princeton. He didn’t leave Kelly and the Ducks, now the Eagles, behind, though. He has paid close attention.

“I never stopped following Oregon, and now I have to follow the Eagles,” Morrissey said with a laugh.

Nothing Kelly has done in his two seasons as the Eagles’ head coach, or this wildest of offseasons, has surprised Morrissey. And, while others believe Kelly has too much front-office power, Morrissey believes Kelly’s success is only going to continue.

“I thought he would be successful (in the NFL), because he’s so smart,” Morrissey said. “He gets it. He’s so passionate and he’s perfect in Philly, where the city is so passionate for football.

“I didn’t know he was going to win 10 games his first year. But I wasn’t surprised he did. Thing is he’s not happy going 10-6. He’s driven. He wants to win the Super Bowl. I can’t speak for him, but the Chip Kelly I know wants to win a Super Bowl and nothing else.”

And, as anyone who knows Kelly says, he’s going to do it his way.

“He’s always gotten more from less,” Morrissey said. “He’ll play to a player’s strengths. People always talk about the up-tempo and that he wants to throw the ball all the time. He loves to run the ball.

“The players he’s bringing in are the players he can win with, that’s what’s he’s about. It’s always been that way with him. He’s all about the players. In college, it was all about player development.”

And according to Morrissey, having fun doing it.

“Chip’s all football, but he has fun,” Morrissey said. “I looked forward to coming to work every day. He makes it fun for the coaches, and he makes it fun for the players. He puts them in great positions to be successful. He’s just so intelligent, always reading, always researching, looking for new ideas I don’t think there’s a better mind in football.”