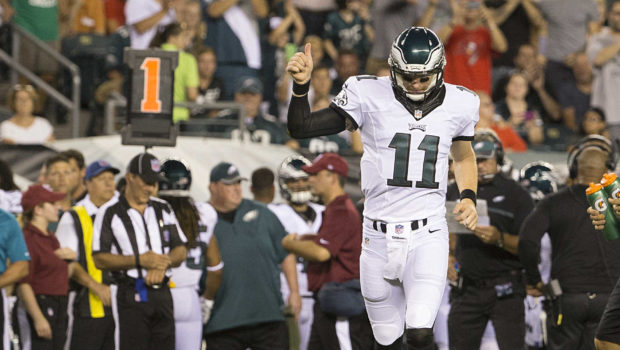 Eagles fans who trundled to the Linc last night to see an otherwise meaningless exhibition game between the Birds and the Tampa Bay Bucs found meaning very quickly!

The Eagles had every right to be anxious when Carson Wentz, who they hope will be their franchise quarterback, took the field last night.

Most expected Wentz to start the second half — the coaching staff put him in for the team’s final drive in the first half. Most anticipated he’d begin the game with a balanced offensive approach; he threw on his first five plays.

The Eagles gave Wentz 35 snaps and 24 pass attempts. And they gave fans, media and draft trade engineer Howie Boy Roseman plenty to chew on in the rookie’s first career game.

Wentz finished 12 of 24 for 89 yards, no touchdowns and an interception, which is almost expected for a rookie quarterback getting his feet wet in the NFL.

More importantly for Wentz — and his future status as a worthwhile investment for the Eagles — there were subtle signs of growth that should encourage the team he’s on the right path.

Wentz struggled at times with pressure anticipation while at North Dakota State. He rushed his footwork and steps instead of reacting to his checkdown or working to elude pressure. Four times in his pro debut, Wentz did react to pressure, avoiding the initial rusher to work to the perimeter where he found his bailout receiver, threw the ball away or took off running.

In college, Wentz often locked onto his first read too quickly, opting for a gunslinger mentality and delaying his progressions when needed from the pocket. Thursday, Wentz routinely seemed on time on slant routes, on outside breaking routes and in transition off play-action.

The Eagles kept things fairly basic for Wentz, outside of one deep shot. His passing chart shows 13 passes throw under 7 yards, and all but one to the midfield or to his right, where the right-handed passer is clearly most comfortable. The Eagles called quick slants, running back checkdowns and occasional comebacks for the rookie as the game progressed.

Wentz isn’t all optimism after his first game: By his own admission, he isn’t a finished product. His red-zone interception was a brutal mental mistake caused in part by overconfidence. He also missed a handful of checkdowns on rollout plays and forced perimeter throws on a few occasions after rushing past his first read.

Even after a promising, surprisingly comfortable debut, Wentz is still further away from NFL readiness than fellow first-round quarterbacks Jared Goff of the Rams and Paxton Lynch of the Broncos.

But Wentz has the added benefit of little to no pressure to play early (or at all) during his rookie season. Meanwhile, it’s important he takes advantage of the preseason’s increased focused on development. He needs to become comfortable with NFL speed and grow the confidence he’ll need to lead the Eagles organization in the future.

Wentz has a way to go before he’s able to prove he was worth the hefty price Roseman and the Eagles paid to secure him, but Eagles fans and front office brass happily received validation of Wentz’s promise in the team’s first game.

After three-plus months of waiting, his pocket play flashed efficiency, his confidence encouraged optimism and his continued development promises the best is yet to come.