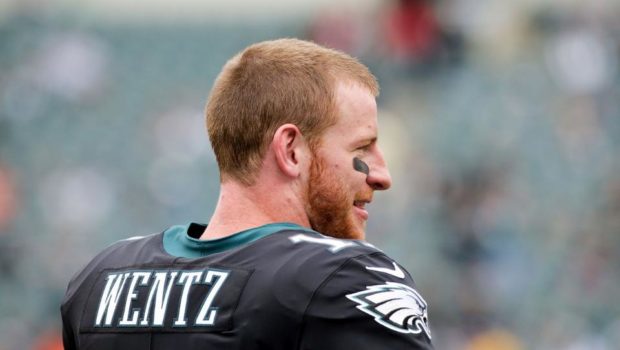 FORGET TD’S, EAGLES’ WENTZ SAYS, WINNING IS THE ONLY THING!

Carson Wentz threw four touchdown passes and the Eagles won their seventh consecutive game by routing the Denver Broncos 51-23 yesterday at the Linc.

The Eagles improved to 8-1, the best mark in the National Football League.

But Wentz thinks stats are meaningless.

Wentz tossed at least three touchdown passes for the fourth time in the last five games. He also became the youngest player to throw at least 23 touchdown passes through nine games since Dan Marino had 27 in 1984.

“He prepares so well each week,” Eagles head coach Doug Pederson said of his second-year quarterback. “It’s fun to watch.”

The Eagles didn’t become conservative with a big lead after halftime and extended their advantage to 38-9 when Corey Clement plunged in from 2 yards out with 7:32 left in the third quarter.

Following a 50-yard interception return by safety Rodney McLeod, Alshon Jeffery hauled in his second touchdown catch of the game, from 11 yards out, for a 44-9 Eagles’ lead with 3:00 left in the third quarter. Jake Elliott’s extra point misfired, a rare issue on this day for the home team.

“Everybody is dialed in,” Eagles defensive end Brandon Graham said. “Everybody knows the game plan and we execute. Everything is not perfect, but overall everybody is striving to be perfect.”

The Broncos scored two touchdowns to make things interesting. Backup quarterback Nick Foles was sacked by linebacker Von Miller and linebacker Brandon Marshall ran 19 yards for a score to close the Broncos within 44-23.

Clement’s second rushing touchdown — he had three overall — came late in the fourth quarter and pushed the Eagles further ahead, 51-23.

“I‘m just having fun,” said Clement, who signed with the Eagles as an undrafted free agent from Wisconsin. “It doesn’t matter what happened prior to me getting here. I have an opportunity and I‘m taking advantage of it to the best of my ability. It’s been great. I want to keep it rolling.”

Wentz tossed three touchdowns in the first half as the Eagles rolled to a 31-9 lead against the top-rated defense in the league in total yards. Denver came in allowing 261 yards per game and it gave up 261 in the first half.

Wentz threw touchdown strikes to Jeffery, Clement and tight end Trey Burton, pushing his total to a league-best 23 this season.

The Broncos’ entire offense in the first half consisted of three field goals from Brandon McManus.

Ajayi, picked up by the Eagles from Miami for a fourth-round draft pick in 2018 just before the trade deadline, scampered in from 46 yards out for a commanding 22-point advantage at halftime. He rushed for 77 yards on eight carries. “It was great,” Ajayi said of his debut. “God is good. Excited to be here. Just trying to be a part of the team.

The Broncos were hampered by nine costly penalties for 70 yards in the first half. They finished with an astounding 14 penalties for 105 yards.

“That’s unacceptable (and) we can’t have those,” Joseph said. “We’re just trying to make plays and got off on the snap count too early.”