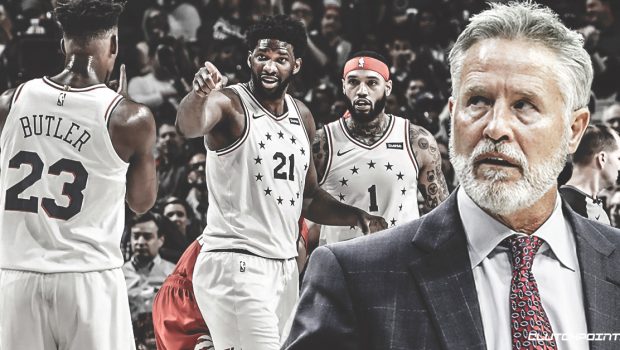 FOR THESE SIXERS, THE FUTURE IS NOW!

So, where do the Sixers go from here?

With Joel Embiid, Ben Simmons, Jimmy Butler and Tobias Harris as their Big Four, the 76ers equipped a starting five nearly as talented as Golden State. But when you’re mentioned with Golden State in terms of talent, you’re not supposed to flame out in the second round.

The first step they made was probably their wisest one: retaining Brett Brown. Brown has been there from the very beginning of the 76ers process. Ideally, it doesn’t make much sense to get rid of the coach who has been the most patient in this process (no pun) but also given them the most success since the Allen Iverson era.

Their second step is deciding what to do with Jimmy Butler, Tobias Harris and lest we forget, J.J. Reddick. Both Butler and Harris are restricted free agents and will be well coveted by most teams. In that same process, teams will also do what they can to sign both players to a max deal.

Philly can do the same, but it could send them soaring into the luxury tax. Is it worth it? logistically, no. But in the era of the super team, logic sometimes must go out of the window. In short, the 76ers must spend money to keep competing.

As for Reddick, he took a pay cut worth $10 million last year while still earning $12.5 million last season. Turning 35 in June, taking a pay cut to win championships shouldn’t be a difficult decision. While Reddick’s age could be a probable concern, the 76ers should still value his jump shooting.

Embiid fits the current NBA prototype of the versatile, stretch-five big. But his true value is being a traditional, back-to-the-basket center who wears down the defense in the paint.

Simmons has the playmaking ability of a guard and the scoring instincts of a forward. But his true value is in the open space: running the floor by scoring and passing. Embiid’s value can block the blessings of Simmons true value and vice versa. Moving forward, this may continue to hinder the 76ers.

Both need the paint to dominate the pace and flow of the game. Simmons makes up for his lack of shooting by attacking the paint, utilizing drives to dish out to open teammates. Embiid dominates the ball and needs 20-plus shots per game. Brett Brown has not found a steady way to get the two to compliment each other. And it also doesn’t help that the two are not the closest of friends off the court.

Chemistry matters. Especially when it concerns two building blocks for a franchise. While Simmons best suits the personnel that the 76ers have, a talent such as Joel Embiid does not come every day.

But if the 76ers leave the option of choosing between Embiid and Simmons, there are two things that should be considered. First and foremost, which style do the 76ers want to employ moving forward? The 76ers face a Kevin Durant-esque issue in Embiid.

When he’s on the court, sometimes their pace and space style has to come to a stop so that Embiid can get his touches down low. When it works, it’s primarily effective. But when it doesn’t, it can cause confusion while diluting the 76ers attack.

In Game 7 against the Raptors, Embiid connected on only 6-18 shots. Because he employs a physical style of basketball, the Raptors keyed in and made it difficult for the 76ers big man. Had three of those shots went in, would there be a Kawhi “the shot” moment? Probably not.

Second, the 76ers must consider the health of both players and their impact moving forward. While Simmons missed his first full season, health hasn’t been an issue since. Simmons has played and started in 81 and 79 games during his first two NBA seasons respectively. As for Embiid, he’s dominant when he plays, but that’s when he reaches the court. Embiid has missed 102 games in the last three seasons and needs constant, round-the-clock treatment to play. Also can’t fail to mention that he missed his first two NBA seasons.

Here, the 76ers must ask themselves a simple question: do they want to stick with great-but-injury-prone Embiid? Or move forward with great-but-no-jump shot Simmons?

A player of Embiid’s caliber, maintenance will always be an issue. But usually, the body of someone seven feet tall don’t improve overnight. With Embiid, what you see with his health, is what you get.

Perhaps, the best example on which way the 76ers should go is to examine their Game 3 performance against the Brooklyn Nets without Embiid. There, the 76ers scored 131 points, while Simmons scored 31 points, had nine assists and four rebounds. Simmons took 13 shots and connected on 11. Harris would score 29 points, while Reddick and Butler chipped in 26 and 16 points respectively.

Without Embiid clogging the lane, the 76ers could further utilize their breakneck pace with no restrictions. But also without Embiid, they don’t have the physical inside presence needed. The 76ers have a lot of decisions to make: keeping the core together or not. Choosing to build around Embiid or Simmons. The task at hand isn’t easy or fruitful, but it’s essential to get done for the future of the franchise.

To start, they already made the right choice retaining Brown. However moving forward, do they elect to keep the entire core intact? If so, do they pull the plug on the Simmons/Embiid experiment? There isn’t a wrong answer necessarily, but there is a right one.

If they chose correctly, it will place them in the path of competing with the Golden State’s. If not, they can be in the class of the Houston Rockets and Oklahoma City Thunder, asking themselves what could have been.